December Treasures in My Closet

Interesting. I think the Christmas books are already out, or will be out long before December. So, there are only five December releases in my closet right now. 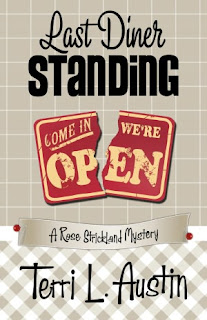 The cover might not look like it, but Terri L. Austin's Last Diner Standing is a Christmas mystery from one of my new favorite publishers, Henery Press. Rose Strickland is a part-time waitress, part-time student, and full-time friend. She's having a blue Christmas. Her best friend is arrested for attempted murder, her sexy bad guy crush is marked by a hit man, and her boss is locked in an epic battle with a rival diner. Rose sets out to investigate, and save those she loves.

Sara Blaedell's Farewell to Freedom is set in Copenhagen where Detective Louise Rick is investigating a gruesome murder. When she receives a phone call from a friend, a crime reporter, she thinks she wants details. Instead the woman reveals her ten-year-old son found an abandoned baby on his way to school. Louise's investigations into both situations points to organized human trafficking and ruthless gangsters who won't hesitate to kill anyone who gets in their way.

The author of the Good Thief's Guide series, Chris Ewan, has a thriller that asks, how can a beautiful woman simply vanish? In Safe House, Rob Hale wakes up in a hospital after a motorcycle crash, he wants to know about the woman who was on the back of his bike. However, he's told he was alone at the scene, and he must have imagined her. Determined to find her, Rob teams up with a London-based PI with a mysterious connection to his late sister. His search reveals that dangerous secrets will not stay secret forever.

Magnus Flyte launches a new series with City of Dark Magic. Music student Sarah Weston takes a job in Prague Castle, not realizing the city is a threshold where the fabric of time is thin. It's a city steeped in blood. Strange things start to happen soon after Sarah arrives, and she learns her mentor might not have committed suicide after all. While she pursues clues, she catches the attention of an unusual group of people. 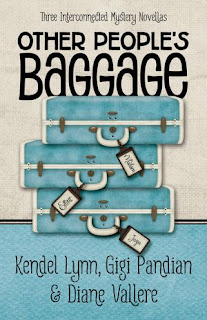 I'm sure there will be a few other December releases arriving. However, with the holidays, this small list might just work.

I'm not familiar with any of these authors. Several titles sound good to me so I'll have to get busy. Thanks for the list, Lesa!

And here I am, still working on those from the summer! I think I read too many genres to stay caught up!

I love to introduce readers to new authors, Jane. I hope there's something here that you'll like.

Oh, who cares if you're caught up, Karen? You're still reading and enjoying your books, and that's what counts!