Sean Chercover for Authors @ The Teague 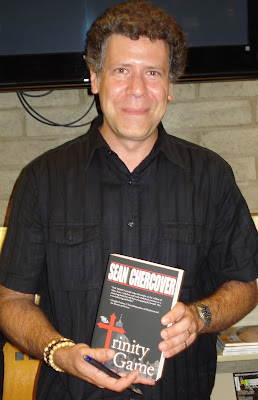 We were fortunate to have Sean Chercover appear for Authors @ The Teague on his book tour for The Trinity Game, his new thriller. I introduced him as one of those people with dual citizenship who now lives in Toronto. I also told the audience Sean had been a private investigator, so he knows the background to his books.

Chercover said he grew up in Atlanta and other sections of Georgia. He was a private investigator in Chicago and New Orleans. His experiences as a P.I. helped him write his two Ray Dudgeon mysteries set in Chicago, Big City, Bad Blood, and Trigger City.

Chercover's new book, The Trinity Game, is the start of a new trilogy. He said authors don't always know where their inspiration comes from for a book, but he knows exactly where this story came from. It was inspired by drugs. Sean had been put on a prescription drug for a shoulder injury.

One night, before Chercover had his surgery, he rolled over on his shoulder. He took some pain killers, and then was lying in the bathtub. He thought the tiles on the ceiling looked like designs. One looked like a frog playing a saxophone, and one looked liked James Joyce. He called his wife, told her, and she told him she was going back to bed, and don't drown. That's when he realized the medication had hit him.

He would distract himself from the pain, and would watch TV evangelists. Some of them were sincere, but others were con men. Chercover loved the theater of it. Those con men would say God will work a miracle in your life if you send $1000. He saw it over and over again. 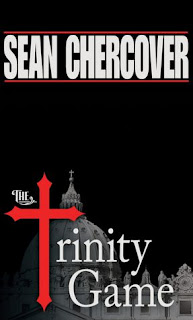 Tim Trinity in The Trinity Game came to Sean fully formed. That doesn't usually happen. Chercover knew he was a con man, a non-believer. He worked the tent revival circuit between New Orleans and Atlanta. Then, he started speaking in tongues. He didn't even know it, but when his words were decoded, it turned out his predictions were coming true. The Vatican sent someone to debunk him. Daniel Byrne was raised by Tim Trinity. Daniel comes to debunk him, and he wants to debunk him hard and fast. But, Daniel discovers that Trinity's tongues seem to be real.

The idea for The Trinity Game came early for Chercover. He had to write that book. He first had the idea for it in 1996. He originally wrote it as a screenplay. It was too unwieldy, though. And, Chercover hadn't written a book before. He felt it should be a book. He had always wanted to write novels.

Chercover became a private eye because he wanted to write crime fiction. He became a P.I. in Illinois. He intended to do it for four months, and then it became a job, and he did it for four and a half years. He did TV documentaries, sold a screenplay that was never made. He decided he needed to do it or quite talking about writing. He wrote the couple Roy Dudgeon stories, but this story wouldn't let go.

While doing research, Chercover learned in 1983 Pope John Paul II abolished the Office of the Devil's Advocate, the office responsible for investigating miracles. That job was actually transferred to another office. In the years after, there were all kinds of beatifications. However, the investigation of current miracles still went on, but it was done by another office under a different name. It still goes on.

Sean said readers want a resolution at the end of a book, but P.I.'s don't always learn the whole truth. Chercover told us about one of his cases. A librarian took her car in for a simple oil change and tires rotated. Twenty minutes after she picked it up, the right wheel fell off. This national chain of service centers couldn't hear the claim. She was a paraplegic with outstanding bills. T hey offered her $400,000. They thought they could stall, and she'd accept it. She sued them, and her lawyer hired Chercover to find the mechanic who worked on the car to get his witness statement. He was a mess when Chercover found him. The morning the woman brought the car in, he had just been served divorce papers. He asked for the day off, and was told no. He messed up, and it cost her the use of her legs. The company's legal department to him to lay low, which is illegal. He felt intimidated. But, they got his statement, and got her a $10 million settlement. Everyone had to sign a non-disclosure agreement. The lawyers who had told the mechanic to disappear got off without a punishment. Sometimes, you don't always get justice. You get what justice you can, and then move on. Chercover tries to give readers a sense of justice, resolution.

The Trinity Game is a bigger thriller than Chercover's earlier mysteries. He didn't have to adhere to the same rules. The father/son relationship is a big part of this book.

In answer to a question, Chercover said legal searches and procedures were more difficult in the early '90s, before the Internet. In order to become a private investigator in Illinois, you had to get an Illinois Blue Card, called that because it was blue. You had to take two courses offered by licensed schools. You had to have handgun training. Then, you could become a P.I., a bodyguard or work for a security company. But, you had to work for a licensed P.I. You had to apprentice with them for four years before getting your own license. Insurance companies and law firms sometimes had private investigators working for them.

It had been mentioned that Sean was P.I. in Chicago and New Orleans. He said in New Orleans, you only had to get a business license and liability insurance at a certain level of coverage. There was more oversight for a business selling ice cream. You didn't even have to have training. The licensing of private eyes varies widely. These procedures were the requirements in New Orleans before Katrina, but they may have changed.

I asked about the trilogy because Chercover had mentioned The Trinity Game was the first in a trilogy. He said the next one is The Devil's Game. He has an arc for the characters. He has a three-book agreement.

Asked how he finds where to end the first book when he knows he's writing more, he answered that an author sees things that will pay off in future books. He plants seeds for the next book. The books are set in Atlanta and New Orleans, and in between. The stories are going to move around. At the beginning of book two, Daniel Byrne is living in New Orleans. He is living at the Vatican at the start of The Trinity Game. Daniel does go other places. Chercover said he likes New Orleans. It gets under your skin.

Chercover said there are people struggling with their faith in The Trinity Game. He was pleased that he heard from a minister in Michigan who liked the book, but had to get past the profanity. He admitted he could have pulled back a little more with the language. He said, though, he talked with some priests, and it's surprising how salty their language can be.

Chercover lives in Toronto, but doesn't see himself setting future novels there. He doesn't see Toronto in the same way he sees Chicago and New Orleans. He spent summers in Georgia, and the school year in Toronto when he grew up. He sees Chicago and New Orleans as an outsider, and can write about them. It's hard for him to see Toronto through fresh eyes. In addition, he said publishers wouldn't accept books set in Canada at one time. Louise Penny's books are set there, and they're bestsellers. But Linwood Barclay's books set there are generic and could be set anywhere. Setting is a character to Chercover. He's drawn to setting. The Trinity Game is about faith, fathers and sons, and it's set in the South, Atlanta and New Orleans. But, there is a Canadian in The Trinity Game for those who ask. He's an assassin, but he's Canadian.

He does have a set routine. Writing has to be treated like a job. He sets a word count, 1000 words a day, and those 1000 words are pretty polished prose. Sean treats it like a job. It's easy to spend days doing research. "There's a fine line between research and procrastination."

Sean Chercover ended the program by saying it's important to have someone with whom to talk about writing. His friend Marcus Sakey lives in Chicago. They SKYPE or phone all the time, comparing notes. They send each other chapters. It's important to have early readers. Chercover has Sakey, his mom, and his wife.

If you missed the chance to hear Sean Chercover, you can meet him tonight (Friday) at 7 PM at  the Poisoned Pen in Scottsdale. 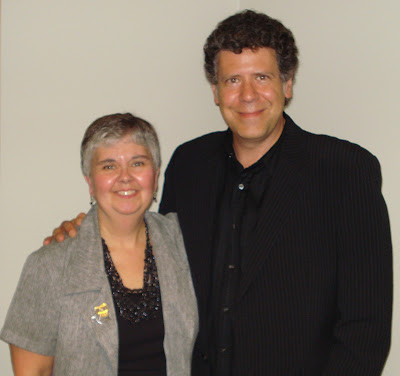 This type of book isn't necessarily the one I'd pick up first. But, after reading your summary and the background of the author, I' think I'll give it a try. He certainly has a lot of experience to draw from and I'm sure that has added to the flavor of the book. Thanks for the review!

I really enjoyed Sean's book. And a great review, Lesa. Thanks.

You're welcome, Jane. Let me know what you think if you get a chance to read The Trinity Game.

Good to hear from you, le0pard13. Hope you've been doing well. You're welcome!

Oh, I like that, Barbara. Thanks for stopping by.