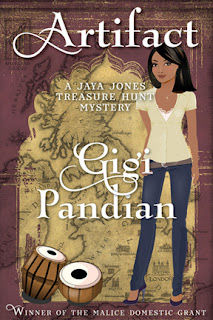 I'm going to commit heresy here. I was never a big fan of Elizabeth Peters' Amelia Peabody mysteries. I liked her Jacqueline Kirby books since Kirby was a librarian. But, I truly loved the Vicky Bliss mysteries. Vicky Bliss was an art historian who was an expert in lost museum treasures. Those mysteries were exciting capers, and had a touch of romance. It's the highest compliment I can pay to Gigi Pandian's debut mystery, Artifact, to say it reminds me of Peters' Vicky Bliss stories.

Jaya Jones is a historian and professor in California, living in a house owned by a Russian landlady, and playing her tabla drums at night with a magician as her partner. She has a casual, laid-back California life until she receives a package in the mail. Her former lover, Rupert, mailed it from Scotland. Since Jaya had just received a newspaper clipping about Rupert's death, she recognized the postmark as the day he died in a car accident. Why did he send her a ruby bracelet? His note said she was the only one he could trust.

Jaya's field of expertise is the history of the British East India Company, so she seeks out an expert to tell her about the piece of jewelry. That's how she ends up meeting Lane Peters, an Indian jewelry expert. That doesn't explain how she and Lane end up on a plane to Scotland, looking for the story behind the bracelet. When Jaya's apartment was broken into, and she and Lane were followed, she was convinced someone had murdered Rupert. Since he was working on an archaeological dig in Scotland, the answers must be there. She wants to find the person who killed Rupert. Lane wants to find a treasure. And, he warns her. "We're not the police. We're historians. We know how to find missing pieces of history. Not attempted murderers."

"We know how to find missing pieces of history." With that one sentence, Gigi Pandian opens a whole world of possibilities for her Jaya Jones Treasure Hunt series. This escapade takes her to Scotland, but there is an entire world of treasures awaiting her. Pandian's Jaya Jones is a unique character, a half-Indian, half-American historian with a quick mind, and  a deceptive tiny appearance. And, Jaya's friends are unusual and interesting. Artifact is fun, fast-paced, and offers a glimpse into two cultures, that of Scotland and India.

This book has really caught my attention. It has such a unique combination of characters. Fast paced, with interesting locales and a treasure hunt to boot? Sounds like a winner to me!

This sounds interesting Lesa - and I like the fact that Gigi has spent time in, and knows, Scotland. There are a few writers who think they can write about a country without ever having been there, and nothing annoys people here more than seeing all the stereotypes trotted out - sounds like this book will be very different. I'll look out for it, thanks for drawing it to our attention.

I hope you enjoy it! I thought it was fun.

My pleasure, Rosemary! As I said, I love to introduce new authors.

Me, too, Karen, and I'm reviewing another one on Friday.