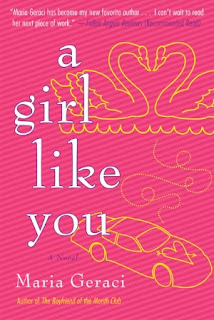 I originally agreed to participate in the blog tour for Maria Geraci's novel, A Girl Like You, because it sounded intriguing. What happens when someone overhears a conversation, and they're referred to as "the ugly friend"? And, the book takes place in Tampa, which piqued my interest. Then, I started it. First person narration, and it opens in a bar where a bunch of 30-somethings are partying. I was afraid I'd picked up another one of the chick lit novels I swore to quit. The women are too young, too immature, and I just don't care anymore. Wrong! Geraci's characters are well-rounded, intelligent people who happen to be in their early thirties still looking for answers. A Girl Like You is a terrific book. There's some focus on romance, but the focus is on the main character's life decisions, not just romance.

Emma Frazier is a hard-working journalist who works for Florida! magazine. In the six years she's worked there, she hasn't called in sick. She loves her job, loves Mondays and the weekly staff meetings, and the weekly doughnut ritual. And, she's a little in love with her boss, Ben. Her friends try to set her up with him, but he leaves the bar with the woman who told a close friend that Emma was "the ugly friend". What does Emma do? She doesn't try to prove she's sexy or alluring. She tries to get the next scoop for the magazine. She wants to write "A Day and a night in the life of a NASCAR super legend". She went to high school with Trip Monroe, a Florida legend, and thinks she can get an interview. But, getting an interview with Trip takes her home, where she uncovers some surprising secrets.

Home is a few hours north of Tampa, a town of 7,000 called Catfish Cove. That's were her two mothers live. Emma's mother is a doctor, and her Mama J owns a bookstore there. Emma says she was "Raised by two women, one of whom believed intelligence is the most important quality a woman can possess, and the other of whom placed kindness, good manners, and an appreciation of poetry even above intelligence."  Emma went home to find answers about Trip Monroe. She found answers about herself as well.

Emma Frazier is exactly what her moms wanted, an intelligent, kind woman. It was refreshing to read about her, when I expected someone totally different as I started this book. She's a woman who even cares about the subjects she interviews in her job. And, it's that Trip Monroe story that changes so much.

A Girl Like You is an intelligent, warm, funny novel. Don't let the opening scene deceive you. This is the story of a grounded woman, just trying to succeed in life and love on her own terms.

*****
FTC Full Disclosure - I accepted this book in order to participate in the blog tour.
Posted by Lesa at 4:00 AM

This does sound good and glad to know it has some substance. I love a character who, instead of reinventing herself physically, decides to work hard and show everyone what she's really made of. Great role model. I'll be sure to get a copy of this one. Thanks for the terrific review.

Lesa, I'm so glad you told us that this isn't just the usual chick-lit (not that there's anything wrong with that, but I have to be in the right mood...). This sounds much more intriguing, and I'll look out for it.

Sounds fun--I'll see if I can get it before my vacation.

I agree with all of you. I'll read chick lit, but I've gotten a little tired of it in the past. This one does have a character with substance. She knows she's never going to be the gorgeous slim woman. But, she's intelligent, learned to appreciate her moms, and I really liked her.

The cover alone would have prevented me from picking up this book, but your review is terrific so I'll make sure to check this out. Thanks, Lesa!

Thanks again for the recommendation. This was fun and meaningful. I liked the way the story didn't turn out to be total wish fufillment, as I feared it would for a while.

So I read this book and it's amazing!!!
The ending and well.. Every part of it was full of excitement and I couldn't put it down. I'm usually not the one to read books. But I loved the ending. Her and Richard!! Who would've thought of it?!