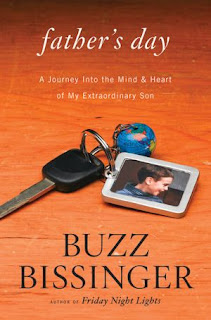 Buzz Bissinger is best known as the author of Friday Night Lights. However  Father's Day reveals the man he truly is, an insecure, often angry man who loves his sons with his whole heart, but often doesn't know how to relate to his son, Zach. Father's Day is Bissinger's account of the attempt to get to know his son by taking a cross-country trip with him, a trip that revealed as much about Bissinger as it did about his son.

Father's Day is subtitled "A Journey Into the Mind & Heart of My Extraordinary Son." Zach is the younger of two twins. Although they were both born prematurely, Gerry, the older one, is a graduate student at Penn, majoring in education. Zach was born with brain damage. He is a savant who attended special schools, will never drive a car, will hold jobs as an errand boy or a grocery bagger. And, Bissinger admits, "I am not at peace with my son."  He feels guilt and shame that he feels that way about his son. "I love my son deeply, but I do not feel I know him nor do I think I ever will."

In an impulsive attempt to get to know Zach, he decides they'll take a ten day trip together, driving from Philadelphia to Los Angeles, stopping at all the places they lived or knew well. It's a trip in which Bissinger hoped to bound with his son. Instead, he found himself angry, frustrated, and overcome with love when Zach proved to have more patience than his father. Zach, who could remember anyone's birthday, also was a brilliant map reader, and often he had to direct his father.

Buzz Bissinger doesn't paint himself in a pretty light in Father's Day. He is honest about his anger, his helplessness. He is still fearful by the end of the trip. But, he uses this book to teach himself, and readers, that a young man with a disability can still have strengths and abilities that will allow him to be happy and succeed in his own way. In the end, it was Zach who gave his father a gift of realization in Father's Day.  Even if Buzz Bissinger will never fully be able to accept his son's disability, he sees Zach as "The most fearless man I have ever known, and the most admirable."