Objects of My Affection by Jill Smolinski 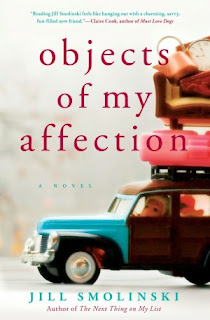 Jill Smolinski is an expert at pointing out the pain in life, while treating it with humor. Objects of My Affection brings together two women living with pain, both afraid to reveal their feelings.

Lucy Bloom gave up everything for her son, Ash. She sold her house, kicked out the man she loved, and spent all her money to send her nineteen-year-old son to drug rehab in Florida. She's sharing a bedroom with her best friend's four-year-old daughter while she tries to get a job. Her best chance is to take a job that no one else seems to be able to handle. As the author of a book on organizing, Things Are Not People, she's hoping to get the job of cleaning out Marva Meier Rios' house. Marva's son, Will, promises her a bonus if she can get his mother's house cleaned in two months. The renowned artist is also a hoarder. Although she herself has given a date of May 15, she is reluctant to part with anything.

Day after day, Lucy finds herself fighting Marva for every piece of clothing and every collectible piece in the house, some to go to auction and some to a yard sale. It seems to be a losing battle until Lucy calls in her ace in the hole, her ex-boyfriend, Daniel, a movie and collectible buff who understands the value, sentimental and monetary, of much of Marva's possessions. Even so, it's an ongoing battle to pry possessions away from her. Lucy's fired and rehired a couple times, until the day she and Daniel learn why Marva has set a date for the goods to be out of her house. Then, it becomes a battle between the two women, each trying to show the other what is important in life, and when it's time to let go.

Smolinski deliberately made Lucy an organizer and Marva a hoarder to show the contrast between them, and the difference in their beliefs and their lives. The war between the two women, and Lucy's attraction to the head of the work crew bring humor to the book. And, it is quite funny at times. However, Objects of My Affection is also a story that digs deep into the emotions and fears both women have. Both women use their obsessions to hide their neediness. And, despite their ongoing battles, Lucy and Marva need each other. Sometimes it takes an outsider to point out what's wrong with a pattern of thinking and living. And, sometimes, even an organizer needs to learn when to let go.

Like one of my favorite authors, Barbara O'Neal, Jill Smolinski has a gift for writing about the lives of women. It's in the daily routines, the jobs, the relationships, and conversations and the wit, that both authors bring their characters to life. Objects of My Affection is Smolinski's latest slice of life. Her characters, and her readers, need to take time to appreciate it.

Lesa, thanks for reviewing this book. It sounds like a book I will very much enjoy. It's going on my to-be-read list right now! I'm fascinated with hoarding and organizing and I love women's fiction. Three-way win!

Oh, I love those books that appear to be winners all around, Nancy. I hope you enjoy it!

Wow, Lesa...I loved your review. This book sounds like a lot of fun and is going on my list right now!

Oh, Beth! I'm always so pleased when you say you love a review. Thank you. I think you will enjoy it.

Lesa, I would have missed hearing about this if it weren't for you (again!). Thank you! If I wasn't already interested, your comparison to Barbara O'Neal cinched it.
Hugs!!
Kaye

Love it! There won't be the food in it that Barbara O'Neal often has in hers, Kaye, but the book reminds me of her writing. I love it when I can introduce an author or book to someone like you who is an avid reader.

8. Look for way to do things better, and more efficiently. Change a routine task - develop a new process. Instead of handling your e-mails as you get them, set aside specific times during the day to respond. Medical Assistants 5. Mind Your Language The employer would like clear answer. If yes or no is appropriate, say so. You must practice the proper use of English language because it is going to be important on the job. The words that are fine with your friends may not impress your interviewer. He will not want to hear any slang from you. If you are asked question that requires detail answer, it should be so answered otherwise it will be considered as slang. "I do not go to gym". Turning your personal shortcomings into professional ones is a big mistake you can make. It does not help you at all. It only highlights your personal weaknesses along with professional ones making you more unwanted. Such answers also distract the conversation and the flow of interview and you may not get selected.