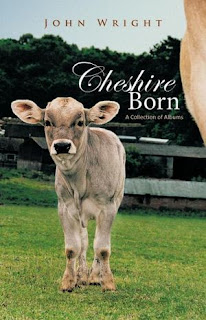 John Wright's Cheshire Born is a departure for me. Called "A Collection of Albums," it's the story of  Wright's life, broken into sections. And, it's written in various forms of poetry.

Yes, Wright was born in Cheshire, England. The first section of the book is set in Cheshire, and begins with his birth. It's a section in which Wright remembers the ordinary parts of daily life there. In 1960, there was only one family on their road with a phone, and they would take important messages, including the message when someone died. There are poems bout working men, men going off to work, the window cleaner, a poem called "Ragbone" about the man who traded for rags.

But, it's the second album of the book that rings with poems of love. Wright made visits to his relatives in County Mayo, Ireland when he was a child. It's the portraits of those people that shine in this book. He captures their portraits and their voices. One of my favorite poems brings back memories of my own beloved grandfather.

My grandfather wasn't Irish, but oh, the times I sat in his lap as a child!

It's obvious that John Wright remembers those visits to Ireland with love. He writes about family, great uncles and other relatives. And, he writes poems about tinkers, and warnings he never understood as a child.

At sixteen, Wright went to Holland for two weeks on his own, and there is one album about that visit. His poem, "Tram" ends with the homesickness experienced by so many young people on their own for the first time.

"When I saw the magnificent three-prong
pier reaching out longingly for East Anglia
I gazed across a lonely sea and wondered
why I'd come so far away from who I am."

At nineteen, though, Wright left home for good, moving to Australia where he worked as a psychiatric nurse.One section deals with his life there, followed by a return visit to Ireland, and then a final section dealing with his married life as a husband and father in New South Wales.

Wright uses a number of forms of poetry, including haiku in the book. It's a thoughtful view of his life, the people and countries that shaped him. My favorite sections, as I said, are the Ireland albums. The love is so evident in those poems. Some of the poems are sad, reflecting those moments in life - death, loss, old age. But, in Cheshire Born, John Wright explores life through a series of vignettes. And, it's a pleasure to spend one evening in his company.

Thank you, Beth. It's not easy to review poetry, especially since I seldom read it.

Eleven children have died from swallowing button batteries over the past six years. The Battery Life Saver electronic device dissolves the lead sulfate crystals that are covering the plates, converting them back into the original elements. The most common and well-known energy harvesting technology is the solar cell but there are many others that are emerging. Video content: Pontiac GTO interstate hit and run The well known jingle, "Nothing outlasts a Duracell" happens to be true.