The Unseen by Heather Graham 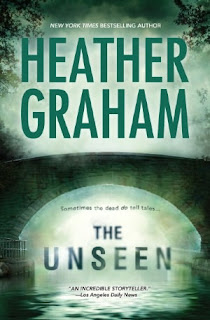 When murder seems to involve the paranormal, Jackson Crow's elite group of government investigators is called in, as in Heather Graham's Phantom Evil, the book that introduced Crow. However, his small group of six is spread thin, so the murders of eight women in San Antonio calls for the creation of a new unit to add to his Krewe of Hunters. In Graham's latest suspense novel, The Unseen, she brings together that new team, to be headed by Logan Raintree, a Texas Ranger, and Kelsey O'Brien, a U.S. marshal.

Logan and Kelsey have heard of Crow's Krewe of Hunters, however they're both reluctant to leave their chosen area of law enforcement. Crow doesn't try to push. He just convinces them he could use their unusual psychic talents, and that the dead are waiting for the case to be solved and a killer found. Logan is angry when he learns a killer is stalking women in San Antonio. And, after Kelsey spends one night in Room 207 at a friend's historical Longhorn Inn, she's willing to put her talents to use. Room 207 was the site of two murders, 150 years apart. And, once Logan learns about Kelsey's sighting of ghosts in that room, he's convinced he knows the reason for some of the murders. Someone is looking for the Galveston diamond, presumably lost when Rose Langley was killed in Room 207 in the 1800s.

As the case heats up, and some of the unnamed victims are identified, Kelsey's experiences in Room 207 grow more vivid. Together, she and Logan talk to ghosts, interview witnesses, and follow the clues indicated by birds, symbols of power in the belief of Logan's Comanche ancestors. Their case heats up, and the passion heats up between the two investigators.

Bestselling author Heather Graham has combined the paranormal, Texas history and the Alamo, romance and suspense in the story of an obsessed killer, and the psychic investigators determined to find justice for the victims. It's a fast-paced story, involving history and ghost stories. Graham is skilled at creating intriguing, mature characters involved in challenging situations. There are a number of suspects, but Graham takes the reader to the climax of the book without revealing the killer's secrets. The investigators who work for the unusual Krewe of Hunters could take cases any place in the country. The Unseen takes them to San Antonio, Texas. Let's hope these unique teams continue to operate in Heather Graham's future paranormal novels of suspense.

*****
FTC Full Disclosure - The publicist sent me a copy of the book, hoping I would review it.

I do love Heather Graham's writing. I already had this new series on my TBR List. Thanks, Lesa.

You're welcome, Karen. Glad it was already on your radar. I'm sure you're going to enjoy it!

Indeed... it was the same for me. This article was really excellent for all of us.
house cleaner in salt lake