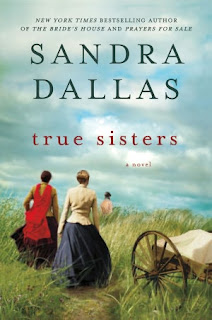 The best of Sandra Dallas' books are truly memorable. The Persian Pickle Club and Tallgrass are two of my favorites. Now,  her latest novel, True Sisters, joins that collection.

In 1856, a group of Mormon converts, emigrants from England and Scotland, set out on a difficult trek to Salt Lake City. The Martin Handcart Company was the fifth group to make the trip from Iowa City to their Zion, the fifth to endeavor to make the trip using two-wheeled handcarts, as ordered by Brigham Young himself. Three of the companies made the trip with few difficulties. The fourth, the Willie Company, encountered snow and lost sixty-seven people. And, then there was the Martin Company, the company that left even later, the company that saw the greatest loss of life, "the single greatest tragedy in the history of America's westward expansion."

True Sisters is the powerful story of the women who set out to walk to Salt Lake City, thirteen hundred miles across prairies and mountains, in heat and then snow. Sisters Nannie Macintosh and Ella Buck traveled with Ella's husband after Nannie's husband-to-be dumped her on the day of her wedding, sending a letter saying he was marrying someone else. Anne Sully was a reluctant participant in the trek. When her husband converted, he sold their business and threatened to take the children if she didn't accompany him. A pregnant Anne refused to convert, but she set out with her two children. Louisa Tanner was proud to be the wife of Thales Tanner, the missionary who converted her whole family. And, everyone in Louisa's family traveled with Thales, a captain on the trip with 100 people in his group. Jessie Cooper refused to marry Thales, but she and her two brothers, three strong young people, were converts who wanted to start a new farm in the promised land. This is the story of women who made the journey, a journey that didn't turn out to be what they had been promised.

True Sisters isn't a happy story. But, it's a powerful story of strong women, women who found the way to go on through loss, starvation, and tragedy. Dallas brings a group of women to life on these pages. In doing so, she brings the story of the Martin Handcart Company to life in a way that nonfiction seldom does. She puts faces on this tragic expedition. True Sisters is a story you'll never forget. It's one more memorable book from a gifted storyteller.

*****
FTC Full Disclosure - I requested this book from the publisher so I could read it.
Posted by Lesa at 4:00 AM

Oh yay! I'm so excited she has a new novel--thanks for the great review!

You're welcome, Sarah. Powerful book. I hope you enjoy it.

Doing a little happy, happy, joy, joy dance here. I just downloaded this book to my Kindle and I'm so excited to see you putting it up there with TALLGRASS and THE PERSIAN PICKLE CLUB. Both are great favorites of mine. I know what I'm reading next. LOL

I wasn't crazy about The Bride's House, Kay, but this one stuck with me, so much so, that I thought about it every time I woke up last night. I think you're going to like it.

I haven't read any of Sandra Dallas' books, but I wasn't reading this type of fiction until recently. Looks like I've got some great material to read. Thanks.

Oh, that's great, Karen. You do have some terrific books ahead of you. I'm a big fan of Dallas' books. The three I mentioned are my favorites, but other people like some of her other books.

Based on a true story, I was enraptured in these women's lives from the first page. The strength of these women really shines through, as well as their heartbreak and their faith. From starving near to death to freezing in the snow-covered mountains, they test their faith and their choices. Beautifully written.

This response fit neatly into about 3-4 minutes, and covers all of the components of the STAR format. Interviewers loved it (and told me that they did) because it flowed so well and I had demonstrated fantastic results. I encourage you to write out your examples too, as this can make them clearer and simpler. Good Luck! First Name, Middle Initial, Last Name Salary Loans -- Advance Salary Before Your Actual Payday If are expecting a consulting business to help you generate a great income in retirement, do a lot of research before you dive in. The same is true of other retirement businesses such as owning a franchise, says Chris Fahlund of T. Rowe Price. Remember that you wouldn't have been called for a second interview if you are not a serious candidate for that executive job. So get your anxiety under control! Feel about it; a managerial place requires for you to guide your staff in a reliable and peaceful manner. If you're anxious and it shows, it goes against the character they are looking for, for such a place.