So Much Pretty by Cara Hoffman 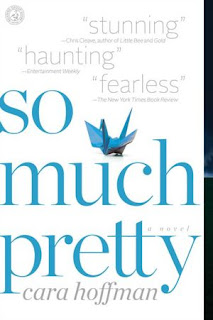 How can you tell when everything started to go wrong? It's obvious from the beginning  of Cara Hoffman's suspense novel, So Much Pretty, that there is going to be  a tragedy in Haeden, New York. There's a dark, unsettled atmosphere surrounding the characters and the town. However, everyone sees the story in different ways, and Hoffman allows them to tell their stories.

Alice Piper's parents, Claire and Gene, were idealistic young doctors when they moved from New York City to rural Haedon when Alice was two. There were only 2000 people there, and Claire and Gene had high hopes for country life. But, it wasn't what they expected, and the two former hippies never fit in. Claire never found educated people to talk with. But, Gene was happy to pass his philosophy and dreams on to his brilliant daughter.

Stacy Flynn may have made a mistake moving from Cleveland to Haeden. After she won the Polk award for local investigative journalist, she had big plans. Work was her life, and she hoped to expose the problems in rural America. She saw a job at the weekly paper in Haeden as her chance to uncover the truth. "Haeden being boring was actually part of the reason I was there. The perceived tranquility, the silence, the old family homes, the meth labs and poverty and great swaths of corn-infested shit-covered nowhere, lives intersecting and connecting through pure habit."

And, when Wendy White went missing, and remained missing for five months, Stacy Flynn wrote stories that the townspeople refused to believe. But, Alice Piper also read read those stories. And, the daughter of idealistic parents, raised as a free spirit, reacted to those stories.

Cara Hoffman's debut novel is not a comfortable story. It's disturbing, with its multiple narrators, multiple viewpoints, and tragic events. She tears apart the picture of peaceful rural life, revealing the ugliness and the blindness that can take root anywhere. Cornelia Read's fans will recognize the bleak atmosphere, and the outsider trying to uncover local secrets. So Much Pretty is a haunting story filled with characters who are unfulfilled in their lives and their dreams. In the end, it's a tragedy.

Note: Cara Hoffman is presently touring with this book, just re-released in paperback. I'll be interviewing her at the Poisoned Pen on Tuesday, April 17 at 7 p.m.

The comparison to Cornelia Read's books hooked me. I'll be on the lookout for this one. Good luck with your interview at PP.

It does sound interesting, yet one you would need to be in the right 'mood' to read.

Thank you, Kay! I read the book so I could interview her. I've never met Cara Hoffman. This book did remind me of Cornelia's books.

Oh, you'd definitely have to be in the right mood for this one, Karen.