The Shoemaker's Wife by Adriana Trigiani 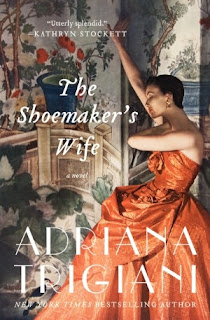 I've often reviewed Adriana Trigiani's books. Her stories of Italian Americans have always featured strong women. Beginning with Big Stone Gap, she's written about families and communities. She's vividly painted landscapes, in loving detail as she described mountain towns and New York City. Now, she's brought all those elements together in the epic story she was meant to write, The Shoemaker's Wife, loosely based on her grandparents' lives.

In 1905, when Ciro Lazzari was ten and his beloved brother Eduardo was eleven, their father died in the mines of Minnesota. Left alone as a widow with two sons, Ciro's mother couldn't handle life in the Italian Alps, so she left her sons at a convent, promising to come back when she could. But, Ciro grew up there, educated by the nuns and his brother, a lonely boy, but a boy who learned to appreciate the beauty in the world while longing for love.

In a small village nearby, Enza Ravenelli grew up as the beloved oldest daughter in a poor working class family. Family meant everything to her. Enza was fifteen when her beloved younger sister died. After her sister's funeral, Enza returned to the cemetery, where she met a young man her own age who had been sent to dig the grave. She willingly kissed Ciro Lazzari, hoping he would return to see her. But, it would be years, and a continent away before the two would meet again.

Circumstances sent both Ciro and Enza to New York, where they ran into each other again in a hospital. And, their lives seemed to have a pattern. They both thrived in their new country, Enza as a seamstress and Ciro as a shoemaker, but their timing was always wrong. Time after time, they missed the opportunity to spend more than an hour or two together. When World War I comes, it provided one more opportunity for the two young people to lose each other.

One paragraph in The Shoemaker's Wife stands out for me. It's a paragraph about Ciro, at a time when he had no idea Enza would become a seamstress. "He figured that all the threads of his experience would eventually be sewn together, taking shape in harmony and form to create a glorious work of art. But who would sew those pieces together? Who would make him whole?"

Trigiani's story of two lonely people, both yearning for love and family, is a story that spans decades and history, as any epic novel should. It's rich in detail, and rich in the Italian and Italian American experience. It's a novel full of color and music. Best of all, The Shoemaker's Wife is full of life and love.

*****
FTC Full Disclosure - I requested a copy of this book from the publisher, planning to review it.
Posted by Lesa at 4:00 AM

Adriana was just here at Bristol Public Library in honor of National Library Week. Big Stone Gap-- the real place, as well as Big Cherry Holler-- aren't too far away so she has lots of friends and family in the area. She is a great supporter of libraries, too, and a delightful guest. If we had any regrets, it was that she didn't really get a chance to promote her new book: everybody wants to hear more about the local connection.

That's so great to hear she appeared at the library. I know she has two aunts who are librarians, so it's nice to hear she supports libraries. I can understand them wanting to hear about the local collection. Too bad, though, about the new book, because it's terrific.

Oh, it sounds like a truly wonderful love story. Thanks!

I enjoyed this novel about Italian immigrants and their lives in northern Italy as well as in America in the early 1900s. Although it is a love story of sorts, it's also a powerful testimony about the strength of the human spirit and the importance of family.

Enza and Ciro meet on a moonlit night in the cemetery of Sant'Antonio da Padova in Schilpario, Italy when they are just teenagers. Though they go their separate ways and carve out new lives for themselves in America, they never quite leave behind their beautiful homeland and the lessons learned there.

This was the first book that I read from this author. It was easy to follow the characters, kept you interested, and would recommend it to friends.

I loved this book for so many reasons, but the history lesson was by far better than anything I remember in school and the sense of family was wonderful to read about!
Would highly recommend this book for a great, well written lesson in history, family and love.