Riley Mack and the Other Known Troublemakers by Chris Grabenstein 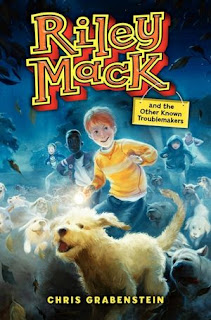 It doesn't matter if Chris Grabenstein is writing adult or juvenile mysteries; his books are a hit.  Now, he's launching a new juvenile series designed for readers in grades three to seven, ages eight to twelve. Forget those ages, though. If you love a good comic crime caper, try Riley Mack and the Other Known Troublemakers before you turn it over to the kids you love. Remember the moment when Paul Newman puts his finger beside his nose in The Sting to indicate the game is on? Do you miss Donald Westlake's Dortmunder and his co-horts? Kids won't recognize Grabenstein's tributes to these great con men, but you might.

Riley Mack is a seventh grader with an unusual group of friends. There's Mongo, a humongous twelve-year-old, Jake Lowenstein, a techno-whiz, and Briana Bloomfield, a bright girl into theatrics. When Briana calls them to rescue a fifth grader from a high school bully, Gavin Brown, they add that boy, Jamal Wilson, to their Gnat Pack. Jamal has an extensive vocabulary, and a talent for picking locks.

Why the Gnat Pack? Because Police Chief Brown hates Riley and his cronies, referring to them as "Known Troublemakers," and the "Gnat Pack." Riley likes that. "Gnats were tiny menaces, clever little pests with the power to drive grown-ups...crazy." And, Riley and his crew relish the chance to drive the police chief crazy. He is a bigger bully than his son, Gavin.

While Riley's father serves in Special Forces in Afghanistan, Riley has his own assignment from his father. "He'd protect his family, he'd protect his friends, and he would defend those who could not defend themselves." If that means he and his friends have to team up to fool a bully, free fifty dogs from a puppy mill, and foil a bank robbery, they'll do that in their own unique style. Riley Mack will come up with a scheme to utilize the talents of his friends.

Don't be afraid to introduce this group of "Known Troublemakers" to the kids in your life. Riley Mack and his friends are bright kids, defenders of the underdogs. And, the police chief might view them as troublemakers, but it's because he's a crooked cop. Riley and his friends are kids who care for others, and work together to right wrongs.

Chris Grabenstein's Riley Mack and the Other Known Troublemakers is a fun romp. It's funny and filled with great characters. The villains are truly nasty and a little stupid. The group of heroes are appealing characters. Chris Grabenstein has been one of favorite authors since I read his first John Ceepak mystery. He continues to win my loyalty with every book. Now, he's added one of my favorite sub-genres to his repertoire, the comic crime caper. Share this book with a kid you love. But, do yourself a favor. If you enjoy a comic adventure, read it for yourself.

It is a fun read, Charmaine. Loved it!

Happy weekend to you and the kitties, Lesa!

Beth! I was talking about you yesterday with Brad Parks. I think you should buy it for them, too. And, you should read it first. You'll enjoy it.