Letter from a Stranger by Barbara Taylor Bradford 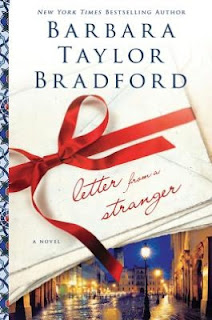 It has been years since I read one of Barbara Taylor Bradford's books. A Woman of Substance remains one of my favorite books, one I still remember all these years later. Bradford's newest novel, Letter From a Stranger, can't top that one. Even so, it's an enjoyable story partially set in a romantic, beautiful city, Istanbul, Turkey.

Documentary filmmaker Justine Nolan had just returned to the Connecticut home she shared with her twin brother, Richard, when she found a letter addressed to their mother, with no return address. Since their mother, a businesswoman, was in California, Justine opened the letter that would change so many lives. Inside, she found a note from her grandmother's best friend, Anita, saying Gabriele missed her family. Justine and Richard were shocked. On the day of the college graduation ten years earlier, their mother told them their grandmother, Gabriele, had died in the crash of a private plane.

Richard and Justine hatched a plan for Justine to leave for Istanbul to find their beloved grandmother. They used a friend's connections, and Justine's instincts as a journalist to track down the woman they thought had died, the grandmother they missed in their lives.

In finding Gabriele, Justine found a city to love, a man to love, and a family history neither she nor Richard had ever known. Gabriele had painful secrets, stories she had never told her family. It was those stories that tore the family apart, and those same stories that would restore a family. Gabriele's story took the family back to Germany in the 1930s and 1940s, to the story of a courageous young woman with equally courageous friends.

Bradford manages to turn Letter From a Stranger into a romance, a story of tragedy and war, and a story of courage. The characters themselves may come across as stereotypes. Everyone is tall, gorgeous, and wonderful, except for the horrid mother. Even so, the story is enjoyable. And, it's the details of Istanbul, the city with its sounds and smells, that truly bring the story to life. Those details are just as exquisite when she describes Gabriele's magnificent gardens.

It might take a little time to get caught up in the story, but once Justine arrives in Istanbul, Letter from a Stranger becomes a captivating book. It's another success for Bradford. (It still isn't A Woman of Substance, though.)

Letter From a Stranger is also available as an unabridged audio from Macmillan audio. Here's a clip if you'd like to listen to it.  http://media.us.macmillan.com/video/olmk/macmillanaudio/LetterFromAStrangerclip.mp3

*****
FTC Full Disclosure - I requested the book from the publisher in order to read and review it.

I really enjoyed it and it kept my interest right up to the end.

I had wondered about this one. It's been years since I read a book by this author too. And, I also hold A WOMAN OF SUBSTANCE close to my heart. Such a lovely book. Did you read the sequels? I think I read the next two, but then stopped.

You're right, Liz. It was a book that kept your interest right to the end. Enjoyable book.

I liked it, Kay. I think I read one of the sequels to A Woman of Substance, and that was it.

This one has me thinking - not sure if that's good or bad. ;o)

My mother stayed up late to finish it, Karen. I enjoyed it. She liked it even more than I did.