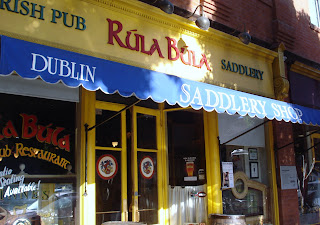 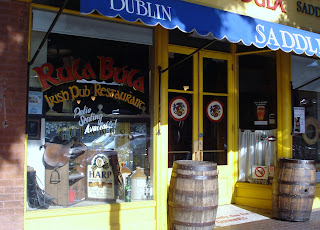 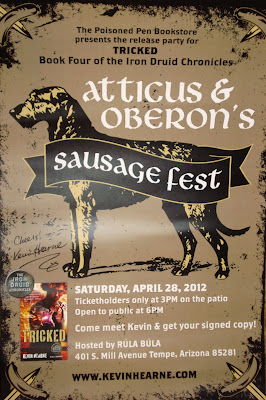 Ticketholders only were allowed on the patio from 3 PM to 6 PM. We picked up our books and gift bags at the patio entrance. 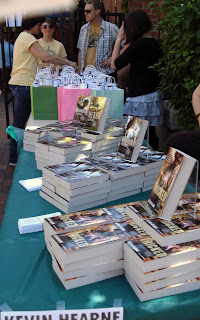 While a musician played and sang Irish music, we enjoyed drinks and dinner. Since Atticus always raves about the fish and chips at Rula Bula, naturally it was one of the three entrees available with a ticket. The other choices were Oberon's favorite bangers and mash or a chicken strawberry salad.


At one point during the party, Kevin took the stage to read the beginning of Tricked. 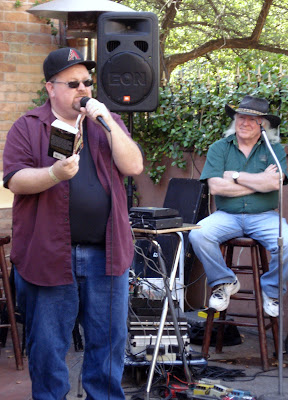 While we ate, Keven went around and talked to everyone, posing for pictures. (If you missed the release party, Kevin will be at the Velma Teague Library on May 19 at 2 p.m. to discuss and sign Tricked.) Two of our friends couldn't make it, so Kevin & I sent greetings to Terry and Chrisite. 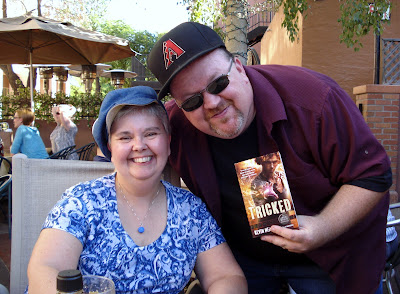 Thanks to Kevin for posing for all the pictures!

We didn't buy just dinner for the ticket price. We also received a bag of swag, an autographed copy of Tricked, a poster from Atticus & Oberon's Sausage Fest, a bookmark, and a great glass with Oberon on it. 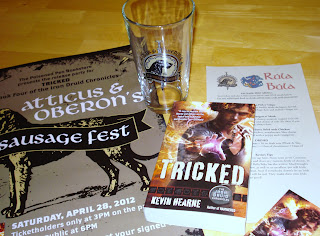 So, here's a toast to Kevin Hearne and Tricked, along with his characters, Atticus and Oberon. Good luck with Tricked, Kevin. Great release party! 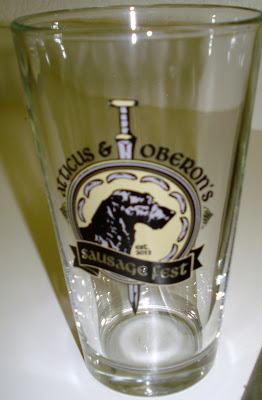 Lesa, that looks just great - you are so lucky to have reliable weather for outdoor events. But I have to ask, what on earth is a chicken strawberry salad?

What a fun event! I can tell you were having a great time!

This time of year, Rosemary, there are a lot of outdoor events. By next month, when it's over 100 every day, we don't have them anymore. A chicken strawberry salad is just a lettuce salad with chicken and strawberries, and usually a strawberry vinagarette dressing of some sort.

Kathy, The two women I went with don't like to have their pictures taken, but I was with friends. I always enjoy their company, and Kevin knows how to throw a good party. So, yes. I did have fun.

Wow, Lesa! That event looks like it was tons of fun. And you look adorable in your denim hat!

Happy Sunday to you and the kitties!

Great Party!!! It looks like you were really having fun. I've just started Tricked, and so far it's pretty good.

It was fun, Beth. Nice way to have a release party.

Happy Sunday to you and all of the ones you love as well!

I wish I had something substantial to say, but I'm just posting because you look so pretty & radiant in the pix! Here's my caption: "This is what happens when you read a lot! Books make you happy, attractive, and fun!" :)

Looks like it was a fun event - glad you had a great time!

Carol! How nice of you to post so you could caption the picture. Thank you for that kind comment. I guess you can tell I love my books!

Great time with friends and good food, all because of books, Karen!