In Pursuit of Spenser, ed. by Otto Penzler 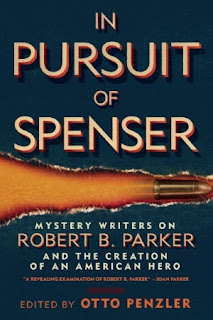 The title of this book was so long, I couldn't fit it in the title slot on the blog. Otto Penzler edited and wrote the introduction to the fascinating book, In Pursuit of Spenser: Mystery Writers on Robert B. Parker and the Creation of an American Hero. It's a book that is going into my permanent collection. Any fan of Robert B. Parker's Spenser will want to read this tribute.

Penzler, along with thirteen authors and Parker himself, deconstructs Parker's writing and the character of Spenser. Penzler traces Spenser's roots, and all of the authors add him to the original pantheon of American detective writers, Dashiell Hammett, Raymond Chandler, and Ross Macdonald. Penzler calls Spenser one of the great heroes of our time.

But, it's Ace Atkins, who continues the character of Spenser in the forthcoming book, Lullaby, who adds poignancy to the image of Spenser as hero. His essay, "Songs Spenser Taught Me," relates his own experiences, as a young college student, a football player, whose father died when he was in college. Needing a role model, he discovered Spenser. Atkins says Spenser taught him about being a man after his father's death.

And, Dennis Lehane, a fellow Boston resident, and a fan, writes about Parker's Boston, and the voice of sarcasm that represented the city. Lehane includes hints of so many of the essays that follow in the book, Susan Silverman, "a polarizing character;" Hawk as the dark side of Spenser; Parker's writings about feminism and gays at a time when it wasn't popular.

Writers from Lawrence Block to Loren D. Estleman to S.J. Rozan stepped up to talk about all aspects of Parker and Spenser, from the cooking and food, Spenser's loyalty to one woman, to feminism. The authors all put a great deal of thought into portraying the author and detective that served as role models for so many of them, some in life as Ace Atkins, and for some in their writing.

Naturally, Spenser as Parker's character is the primary focus of the book, however Parker's other writings are not neglected. There are comparisons of Jesse Stone with Spenser. One essay examines Parker's westerns, while another takes a look at the TV shows and movies. And, Parker himself wrote a piece called "Spenser: A Profile," that is reprinted here, giving Parker the last word about his character's life.

If you're a fan of Robert B. Parker's work, particularly the Spenser novels, you won't want to miss this book. For those of us who felt as if we lost a favorite author, and a favorite character, with Parker's death, this extensive profile brings both of them back to life for just a little while. Robert B. Parker had the final word about his character. However, it's Parker's widow, Joan, who sums up In Pursuit of Spenser. "A close and revealing examination of Robert B. Parker - the author, the man, and the husband - brought to life by the observations and insights of fellow authors who knew him and his work. Extraordinary!"

As a long time Robert B. Parker fan, I was really looking forward to this book. I just started reading it last night, and so far I'm not disappointed. Each essay just keeps getting better. Thanks for the good review. This will be going on my Keeper Shelf!

Mine, too, Bev. I've read every Spenser book, including the couple YA & juv ones. I wasn't a fan of Jesse Stone & Sunny Randall, although I tried a couple of the books. I wasn't disappointed in this book either.

Thanks for this review, Lesa. I've got this book on my list.

You're welcome, Gran. I hope you enjoy it!