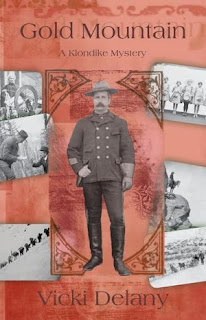 Fiona MacGillivray, heroine of Vicki Delany's Klondike mysteries, called her latest adventure, Gold Mountain, "dramatic foolishness." And, that's precisely what Delany writes in her historic mystery series. She takes aim at the history of the Klondike gold rush, and adds humor and suspense.

In each of the books in this series, we learn a little more about Fiona's past. She's a survivor who fled one tragedy after another, only to end up in Toronto, where her theft of jewels forced her to move on with her son, Angus. In 1897, they ended up in Vancouver, where they heard about gold in Alaska. Hoping to open a theater in Skagway, Fiona discovered that town did not welcome her, unless she was willing to work with the local crime boss, Soapy Smith, or put up with the admiration of one of his men, Paul Sheridan. So, Fiona and Angus moved on to Dawson in the Yukon Territory.

In Dawson, Fiona is queen of her Savoy Saloon and Dance Hall. When Paul Sheridan shows up there, though, he has other ideas. He has a map to Gold Mountain, where he has dreams of striking it rich. And, he's determined to take Fiona with him, and make her his queen. Despite her protests, he drags her with him, leaving Angus to call out the troops, Corporal Richard Sterling of the North-West Mounted Police, and an odd assortment of townspeople. Angus and Sterling are determined to find Fiona. Some of the townspeople might be just as determined to find the riches promised by the name, Gold Mountain.

As Fiona fills in the details of her youth, it will come as no surprise to readers that she just might be able to take care of herself on her travels with Paul Sheridan. She's street-smart, cunning, and, except for one naive mistake when it came to Sheridan, she's a shrewd judge of character.

Once again, Delany has managed to bring the wild years of the Klondike Gold Rush to life. It was a time and place filled with unusual characters, mad schemes, violence and greed. All of that comes to light in Delany's Klondike mysteries. However, in Gold Mountain, she adds just a little bit of mysticism in the legends of the land beyond the river. Readers who enjoy humor mixed with history and mystery might appreciate Delany's stories of Fiona MacGillibray, the self-proclaimed most beautiful woman in Dawson. Gold Mountain is one more story to add to Fiona's legend.

I've yet to try this particular series by Vicki Delany, but I will. This one sounds good. I've loved all her other books.

Totally different from her other series, Kay. This is is her comedy series.

Another one who hasn't tried this series but do love her others, so this one is on the pile. Thanks for pointing it out to me.

My pleasure, Tina. I hope you enjoy it.

New series to me, too. Sounds interesting.

So, a new series to a number of readers. It's always fun to introduce a new series, Karen.

Count me in among those who've not heard of or read this series. Your review is terrific and I've added this author to my list.

Well, Vicki's getting ready to leave for Malice Domestic, the conference for writers of traditional and cozy mysteries. And, she'll leave knowing a number of readers have been introduced to this series. Very nice! Thank you, Beth!

Thank you, Lesa! I'd love to meet some of your readers at Malice.

You're welcome, Vicki! I hope you do get to meet some of them there. Someday, I'll make it there as well.

I am interested in reading this book as Soapy Smith was my great-grandfather and the subject of my own biography of his life. As a novel I'm curious how Vicki portrays Soapy and his gang.

Thank you, Jeff. That's fascinating that Soapy Smith was your great-grandfather. I hope you enjoy Vicki's book.