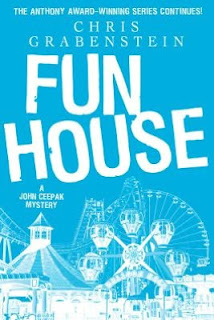 Chris Grabenstein, one of my favorite authors, just won the Agatha Award for Best Children's/Young Adult Novel for The Black Heart Crypt. And, if you tell me you never heard of Chris Grabenstein, I'll know you haven't been paying attention when I raved about his John Ceepak mysteries, or as I prefer to think of them, the Ceepak/Boyle mysteries. I'll forgive you, though, if you try his latest mystery, Fun House. As much as I love his children's books (which I do), I promise you the Ceepak mysteries are not for children.

Although Fun House is the seventh book in the series, Grabenstein makes it easy for new readers to start at this point. Danny Boyle, the narrator of the books, introduces John Ceepak, his fellow police officer and mentor. Within two pages, Danny brings the reader into Sea Haven, a resort town on the Jersey Shore, and tells how he and Ceepak became involved in a reality show filming there. "Fun House" featured five boys and five girls in their 20s who liked to tan, drink and party. Danny said, "Think Jersey Shore meets Big Brother meets Survivor." And, Ceepak, a veteran of the Iraq war, found the language and the lifestyle a little sleazy. It didn't help that his arrest of one of the stars was broadcast on the TV show.

Danny blamed himself for Ceepak's overnight fame. He met Layla Shapiro when she was scouting locations for the new show. Now that the show was filming in Sea Haven, the mayor was ecstatic. Following Ceepak's TV appearance, he agreed that Ceepak and Boyle would head up SHPD's Fun House security detail. It wasn't fun anymore, though, when Skeletor, a local drug dealer, showed up. And, it was even less fun for Danny and Ceepak when Skeletor made fools of them, and the TV ratings shot sky high. Add in a murder or two, and the bloodthirsty TV audience can't get enough. It's only Danny and Ceepak who take the murders seriously.

For those of us who have followed this series, it comes as a shock to read that Ceepak is considering a job in Ohio. It also shocks Danny. Through Danny's eyes, we've watched their relationship change as Danny matured from a cocky summer cop to a twenty-six-year-old veteran of the force. Danny doesn't hesitate to credit Ceepak, his mentor, and the lessons he learned. His admiration for the man who lives by the West Point code of honor, and "will not life, cheat, steal, or tolerate those who do," is obvious.

If you haven't read these mysteries, I hope you take the time to try one of the wittiest series around. I've often compared Ceepak and Boyle to Nero Wolfe and Archie Goodwin. It's a series narrated by the bright, cocky sidekick. There's humor along with a sharp poke in the eye at our culture and the obsession with reality TV. At the same time, Danny and Ceepak take their jobs seriously. They are determined to find a killer, and it doesn't matter who the victim was. Every victim deserves justice.

How do you promote an intelligent mystery series that is also witty? Chris Grabenstein's books cannot be compared to Janet Evanovich or others who write humorous mysteries. The outrageous activities in this book have everything to do with the filming of a reality show, and nothing to do with incompetent detectives. And, I'm afraid the pastel book jackets do nothing to attract readers to these books. These are not fluffy mysteries. These are serious murder mysteries that are set in a resort community, hence the carnival rides on the covers.

I hope you trust my judgment. Try Grabenstein's Fun House. It's my chance to introduce you to two of my favorite characters, John Ceepak and Danny Boyle, and one of my favorite authors.

Can't wait to read this one. Such a wonderful series. One of my top-of-the-list and always-read authors.

Yes, Kay! One of my top-of-the-list authors as well. I know you're going to enjoy it.

I'm among those who've never read this author. He sounds interesting.

I found three of his earlier books in this series at bargain prices in electronic edition at both B&N and Amazon. I bought those to test the waters. If I enjoy those books, I might try to read the series though as it comes out.

Thanks for your recommendation.

You're welcome, Joe. You'll have to let me know if you liked them. I'm a BIG fan, as you can tell.

Sold! I love Nero Wolfe and Archie Goodwin!! Fun House sounds like a good fun read. And of course I trust your judgement.

Thank you, Karen. Make sure you tell me what you think.

Being a New Jersey native, I can really appreciate the shore adventures of officers Ceepak and Boyle. Chris Grabenstein has a relaxed and funny narrative style that never lets me down. Characters are always colorful, dialog is witty and full of humor. Can`t wait for his next book.