Every Last Secret by Linda Rodriguez 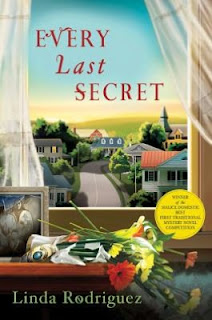 Linda Rodriguez was the winner of the Malice Domestic Best First Traditional Mystery Novel Competition for her debut, Every Last Secret. Some of my favorite books have won this award, The End Game by Gerrie Ferris Finger, The Cold Light of Mourning by Elizabeth Duncan, and one that led to a number of wonderful mysteries, In the Bleak Midwinter by Julia Spencer-Fleming. I'm hoping Rodriguez' mystery launches a successful series.

Marquitta "Skeet" Bannion thought she had fled from her demons when she left Kansas City behind. She left the police force there, leaving behind the legend and then the disgrace of her father, Big Charlie. And, she left a jealous ex-husband who was also on the police force. She only moved twelve miles away to a college town. But, she owns a house, a collie and a cat. And, she is chief of police on Chouteau University's campus. Some of her team isn't happy with a female chief, but she isn't afraid to handle campus and police politics.

Fortunately, she has a team that unites behind her when the college's newspaper editor-in-chief is found dead in his office. There were sexual assault and theft claims against Andrew McAfee, and he might not have been the nicest student on campus, but Skeet feels responsible for the safety of all 8000 students there. And, Skeet's Cherokee grandmother taught her well. "The Cherokee are big on balance. They think imbalance allows dangerous forces into the world. I had to agree. My job was to bring this small world back into balance again."

Skeet and her department have an enormous task ahead of them. As she uncovers dirty secrets in the campus community, she stirs up the hierarchy, who are not happy with a criminal investigation on campus. And, it gets worse, as some of the secrets lead to powerful people at the university. Skeet takes her job seriously, though, and she's going to do her best to protect the students, her neighbors, and a vulnerable teenager who needs her help. "Some bastard came to my peaceful town, my campus, and killed a student." Skeet is determined to find the killer who turned the community upside down.

Rodriguez' debut is perfect for those of us who admire the traditional mystery. Skeet is a flawed protagonist whose relationship with her father strengthened her as an officer, but left her vulnerable, not trusting her instincts in personal relationships. Every Last Secret is the story of a determined search, step-by-step, for a killer. And, the author recognizes the importance of an out-of-balance world, and the restoration of balance, that is a vital part of so many traditional mysteries. It's a pleasure to watch Skeet, her friends, and her team, work together to find a dangerous predator and restore peace.

Rodriguez built her own world, peopled it with Skeet Bannion and an interesting cast of supporting characters, and then allowed violence to tear at the heart of the world. Linda Rodriguez and Every Last Secret live up to the billing as the winner of a traditional mystery competition. Every Last Secret is an exciting debut mystery, filled with the promise of a new strong female character. Now, I'm hoping for Skeet Bannion to have a lengthy career as chief of campus police. It will mean years of enjoyable reading for fans of traditional mysteries.

This sounds right up my alley. Thanks for the tip, Lesa! I always enjoy academic-related mysteries. :)

I have this pre-ordered. I can't wait!!

Oh, and you can bet the faculty is involved in this one, Elizabeth. I think you'll enjoy it!

Release date is tomorrow, Trish, so you should have it soon.

It was good, Karen. Hope you get a copy to read!