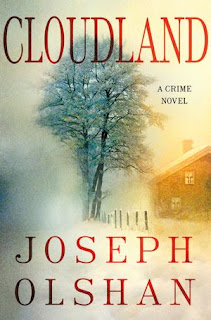 Where do authors get their ideas? Joseph Olshan found the origins of his crime novel Cloudland in his own driveway. Olshan moved to the Connecticut River Valley during a time period when six women were murdered in that area of Vermont and New Hampshire. The killings were determined to be the work of a single murderer, one who was never found. Olshan became a friend of a woman who found one of the bodies, a discovery that haunted her. Putting those stories together with the cars that pulled into his driveway at night, he came up with this riveting crime novel.

Catherine Winslow tells her own story. A former journalist, she now lives in rural Vermont with two dogs and her two hundred fifty pound potbellied pig. Alienated from her only daughter, fired from her teaching job after having an affair with a former student, she writes a household hints column, teaches a writing class to prisoners. She has a quiet life with just a few neighbors on Cloudland Road. Then while out walking during a thaw in late March, Catherine comes across a woman who appears to be sitting under an apple tree. She recognizes the body as that of a nurse who disappeared in January, probably the sixth victim of a killer in two years.

Catherine still misses her career as a journalist, so it's easy for her to agree to help the police and her neighbor, a forensic psychologist, in the investigation. It's an investigation, though, with connections to her own life. Her neighbor, Anthony, is going through marriage problems that remind Catherine of her own past. The investigating detective has an only daughter who has issues, so Catherine can relate to him. When the text of one of her favorite Wilkie Collins books seems to be related to the killings, and Catherine's former lover shows up, her past and her life seem to be pressing down on her. Even Catherine's prisoner students warn her she might be the killer's target. She's very much aware that the killer might be someone she knows.

Olshan's Catherine Winslow is a beautifully developed, flawed heroine who has problems dealing with her daughter and relationships following her husband's adultery and death. She's strong-willed, inquisitive, the perfect protagonist for Cloudland. This is a gripping crime novel, with a perfect ending, a surprise that doesn't come out of the blue, but fits the story. The isolated setting, and the story of the murdered women are vividly created in this book.  Readers who are fans of S.J. Bolton's atmospheric thrillers should try Olshan's Cloudland. Cloudland isn't Olshan's first book. However, it's his first crime novel, and it's pitch perfect.

This one is on my list to read soon. The description just drew me in. Sounds like a good one.

It was good, Kay. Hard to put down. I hope you like it!

The protagonist looks to be an interesting character. Thanks for sharing the review, Lesa!

You're welcome, Nancy. I hope you get a chance to read the book.

This sounds like a great read - going hunting for those nickels and dimes so I can buy it!

ooh Lesa this sounds really creepy. Not sure if I would read it late at night, but it sounds good, and a change from all the cosies I've been submerging myself in lately.

Good luck with those nickels and dimes, Karen. I hope you find enough!

Until the end, I didn't find it as creepy as you think. But, I still wouldn't read it late at night. I hope you get a chance to read it. And, tomorrow, I'm reviewing a cozy!