Behind this door lies a world "Where Words and Imagination Come to Life." 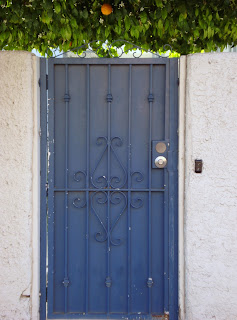 Well, not really, but that's the theme for the Tucson Festival of Books. And, the festival truly is a magical place for book lovers. It's now in it's fourth year, and I've been to the festival every year but the first one.

It was a full day, beginning with the two hour drive to Tucson. Once I arrived, I had a little time before the first panel of the morning, so there was time to scope out the exhibition tents. We immediately caught up with Libby Fischer Hellmann, author of A Bitter Veil. Libby appears for Authors @ The Teague on Monday, March 12. She was working at a booth with Joel Fox, author of Lincoln's Hand, and Pascal Marco, author of Identity: Lost.

The first panel of the day was called "Between Two Wars." Jennifer Lee Carrell moderated, with award-winning authors Rebecca Cantrell and the writing team that makes up Charles Todd, Charles and Caroline Todd. They discussed their mysteries, set during and between the two world wars. Rebecca's most recent Hannah Vogel novel is A Game of Lies. Hannah Vogel is a crime reporter in 1930s Berlin, Germany. The Todds have two series. The Confession, the latest Ian Rutledge book features the shell-shocked veteran who returns to his job at Scotland Yard, and A Bitter Truth is about Bess Crawford, a British Army nurse in World War I.

Mark McLemore moderated the panel about urban fantasy called "Where the Paranormal Hits the Pavement." I went to support Kevin Hearne, author of The Iron Druid Chronicles, who will be appearing for Authors @ The Teague on May 19. Kevin's always entertaining, but this was the funniest panel of the day with authors Cherie Priest, Angela Knight, Cynthia Garner, and Yvonne Navarro.

On the way to the next panel, I had a chance to meet the ringtail cat who is the mascot of this year's OneBookAZ for kids, Arizona: Way Out West and Witty by Lynda Exley and Conrad J. Storad. Of course, I'd pose for a picture with a "cat," even though it's really not a cat. It's in the raccoon family. 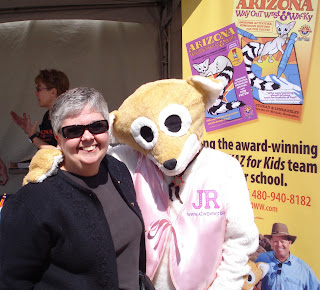 The panel "Queen Elizabeth and Her World" featured authors Jennifer Lee Carrell, Margaret George and Louis Bayard. I just had a short time to listen to this one before I had to run off to moderate a panel.

My final panel of the day was "Cozies Need Respect, Too."

I moderated, but authors Kate Carlisle, Earlene Fowler, and Avery Aames really didn't need a moderator. All three authors have appeared for Authors @ The Teague in the past, so I knew they would successfully take off on the subject. Kate Carlisle is the author of the Bibliophile mysteries. Her new book is One Book in the Grave. Earlene Fowler, author of the Benni Harper mysteries, was there to discuss her series and the latest book, Spider Web. However, she also has a sequel coming out to her bestselling novel, The Saddlemaker's Wife. And, I love Avery Aames, author of the Cheese Shop Mysteries. Her latest is Clobbered by Camembert. Avery, a former actress, is a treat to have on a panel. I thought the panel went well. And, one woman told me it was the best one she attended all day.

We ended the day at Maynard's Kitchen and Market. Rebecca Cantrell, her husband, Toby, and her son, Matt, were already there when we arrived. 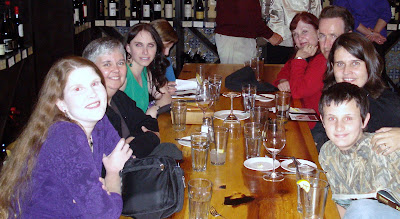 It was a wonderful way to end the day before driving back to Glendale. And, if you haven't been to the Tucson Festival of Books, it's the perfect place for a book lover.

What a wonderful day and wonderful report. Almost like being there--text and photos! Great to finally 'meet' Rebecca Cantrell's son and husband.

Thank you, Janet. Good thing you "met" them now. They're moving to Germany this summer. Rebecca said she'd be back for book tours, though.

Ever consider journaiism as a career? Wait, I guess this blog is sort of a means of journalism already. Nevermind.

I did enjoy your report and photos as well. Very nicely done.

An excellent recap of the events - thank you!

Funny you should mention that, Sandie. My grandfather was a farm editor for a newspaper. My uncle wrote the news for the CBS affiliate in Cleveland until his retirement. It's in the blood, I think. I took a journalism course in high school. And, I love my blog!

You're welcome, Karen. There were a few fun pictures that I missed. One year, I should just skip some of the panels, and spend an hour taking pictures. Lots of fun possibilities at the festival.

Thanks for this! It was great to see and hear a bit of what it was like!