The Summer Garden by Sherryl Woods 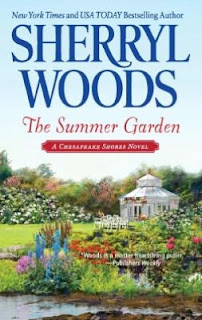 I love Sherryl Woods' Chesapeake Shores books, and I was so disappointed to learn The Summer Garden is the last one in the series. I understand why. She's managed to wrap up marriages for Nell O'Brien's sons and grandchildren, but that doesn't make me any happier.

Luke O'Brien, the youngest of Nell's grandchildren, has been back from Ireland for a month. Even though he has plans to open an Irish pub in Chesapeake Shores, he can't get Moira Malone out of his head. Moira, the granddaughter of Nell's old flame, is a handful, known as "Impossible Moira," but they fell for each other in Ireland. Luke's a typical man with a one-track mind, though. He is determined to get his pub remodeled and open it before tourist season starts, so he doesn't have a lot of time to romance a woman long distance.

Moira misses Luke, but while working as a waitress in a pub in Ireland, she discovers she has a gift for photography. Although she's offered a few jobs, she agrees to accompany her grandfather on his trip to Chesapeake Shores. He's going to spend time with Nell, and she might have the chance to discover if there really is something special with Luke.

Luke and Moira still have that magic spark, but Luke just isn't ready to commit. As the youngest in a family of overachievers, and, with a father who doubted his business plan, he had a lot to prove. But, is Moira ready to put their lives on hold while he builds a business?

Woods' Chesapeake Shores romances are wonderful stories peopled by an enchanting family. She's created a charming town, and people it would be fun to know. The O'Brien family is loud and lovable. They argue, but, everything they do is with affection. And, everything is done under the caring eye of Nell, the matriarch. Woods closes out the series with new life and happy endings. Even so, for those of us who love the O'Briens, it's going to be hard to leave them behind.

One caveat. I would recommend that anyone start with the first book in the series, The Inn at Eagle Point. And, if you like the series, don't skip titles! It's hard to keep track of the family if you don't read it in order. I missed a couple of the books, and regretted it. So, try not to read them out of order.

*****
FTC Full Disclosure - The publicist sent me a copy of the book, hoping I would review it.
Posted by Lesa at 4:00 AM

Lesa, this series sounds great - and, wonder of wonders, they appear to have a copy of the first book in one of our local libraries. Oh no, more TBR!

I have a very old friend who lives in County Waterford, so I am always keen to read books with an Irish aspect. Maeve Binchy's 'Light A Penny Candle' is a very accurate picture of the rural Ireland I first visited thirty years ago, although there have of course been many changes since then.

Someday, Rosemary! Ireland is on my MUST visit list. I'm never sorry when I add books to a must read list. I think you'll like this series.

I just finished this, and I was wondering whether it was the last in the series. I'm going to miss the O'Briens!

Lesa, I hope Scotland is on your one-day itinerary too. Edinburgh (for example) has lots of literary associations.

I'm going to miss the O'Briens as well. I loved them as much as I loved Nora Roberts' MacGregors. Same type of wonderful family.