Due or Die by Jenn McKinlay 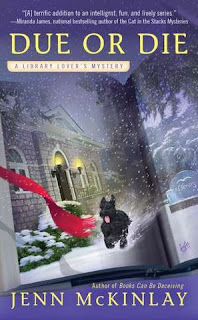 If you've spent any time whatsoever in public libraries, you'll recognize the people and situations in Jenn McKinlay's Library Lover's mysteries. Due Or Die brings back library director Lindsay Norris in the second book set in Briar Creek, Connecticut. This time, Lindsay's in for a stormy ride, in more ways than one.

When Carrie Rushton was elected president of the Friends of the Library, Lindsay knew Bill Sint's nose would be out-of-joint, but she didn't realize how hard someone else would take it. Lindsay receives a threatening phone call, and, riding her bike home from work, someone tries to run her off the road. But, those are only minor worries after Carrie's husband is killed, and Carrie's the main suspect.

Lindsay doesn't believe Carrie is guilty, and it's evident Carrie's landlady, Nancy, doesn't either. She scoops up Carrie, and invites her to stay in the third unit in her house until she feels comfortable returning home. But, with a nor'easter coming in, it might be a while until anyone can return to home or work. The gale-force winds and snow brings the life of the town to a standstill. That gives Lindsay time to ponder the mystery, and to bond with the puppy rescued from the library's bookdrop. Although she thought she'd turn him over to the pound, the bouncy puppy, named Heathcliff, proves his worth as both a watchdog and a hero.

Murder, threats to Lindsay, and a collapsed roof in the Friends' storage shed, along with valuable missing books add up to trouble in Briar Creek. Lindsay isn't the type of sleuth to ignore the police investigation, but she is worried about Carrie. As Lindsay's best friend, Beth, says, she's "incapable of not helping a person in distress." And, Beth isn't about to let Lindsay get away with irresponsible behavior. When Lindsay questions a man, Beth scolds her. "Don't you know the amateur sleuth is never supposed to go off on her own? This isn't an Agatha Christie novel and you're not Miss Marple. You could have gotten yourself into a heap of trouble."

McKinlay recognizes all the traits of a cozy mystery, and handles them with humor. Lindsay and her fellow librarians, along with her friends, are intelligent, likable characters. The highest compliment I can give is I recognize those people. They come to life on the page. Jenn McKinlay gives us mystery, a possible romance, charming characters, books and a library, and, now, an appealing puppy. Due Or Die might feature a librarian, but that's no reason to keep quiet about this engaging series. Check it out!

(Jenn McKinlay will be appearing for Authors @ The Teague on April 21.)

I love cozies set in libraries or bookstores. This series sounds charming!

I preordered this book for my NOOk. Loved the first book in the series and reading your review has made me even more anxious to read it.

Aw, thanks so much for the kind words Lesa. I value your opinion as a reader/reviewer but also because you're in "the biz"! Can't wait to visit the Teague again in April!

This is a fun series, with an amateur sleuth I really like. Hope you give it a try!

You should have it any day now, Lori. I hope you enjoy it!

And, my sisters, who also worked in libraries, Jenn, both say this series hits home with them as well. Really like it. And, I like Heathcliff.

Im a fan of this anuthor, and Im going to have to get this book. =)

This series sounds so good. I love library and bookstore mysteries. I'm already sure it will become one of my favorites. I'm looking forward getting started. Thanks for the great post!

I love any cozy connected with a book. A friend gave me a copy of this one so I am really looking forward to it.

So good to see everyone excited about this series. I hope you all enjoy the book!

Thanks for this review. This definitely sounds like my cup of tea, and I've added it to my to-be-read list!

Okay, confessions....I SKIMMED the review so the book would be a delicious surprise. I am on the waiting list for this title at my library - of all things! (I thought the librarian would be proud!) Glad to find that in the last paragraph you had high praises and kudos.
Thanks for keeping me up to date on some great books.

I saw your scheduled panel for the Book Festival. It sounds like a great one.

I love reading books where you 'recognize' the characters or places - wonderful recommendation, Lesa!

I don't blame anyone one bit for skimming the blog if you intend to read the book. I usually don't read reviews when I'm planning to read it. I don't want anything spoiled.