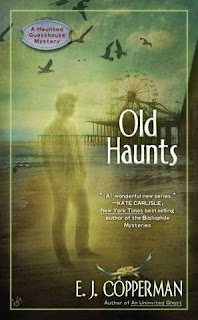 Alison Kerby is just another single mom trying to make a living. However, author E.J. Copperman not only forces her to live with ghosts as the owner of a haunted guesthouse at the Jersey Shore, in the latest book, Old Haunts, he forces her to cope with old memories. Her resident ghosts ask for favors, investigations into stories from their past. But, the worst old memory is the one who shows up unexpectedly on her doorstep, her ex-husband, Steven, not so affectionately known as “The Swine.”
Alison has her hands full. She’s working with a friend’s husband to convert the attic into a room for her daughter, Melissa. There are guests from Senior Plus Tours staying at the house in order to have a ghostly experience. Paul and Maxie were murdered in the house two years earlier, and they agreed to put on daily shows for the seniors. In return, they both want favors, and she’s supposed to use her new PI license to help them. Maxie just learned her ex-husband was murdered, and she wants Alison to find the killer. And, Paul wants her to search for an old girlfriend. Does she really need “The Swine” there at the same time? She knows he’s up to something as he tries to win over Melissa and tells Alison he wants to get back together. Even working on a murder investigation is better than dealing with Steven.
Alison feels as if she’s in over her head when Maxie’s case leads first to a biker bar, and then to problems for Maxie’s mother. But, Alison is tenacious, and she’ll keep plugging along. If her ghosts aren’t happy, no one in her guesthouse will be happy. Copperman’s Alison Kerby is my kind of protagonist. She’s realistic and knows her weaknesses. Alison certainly doesn’t think she’s qualified to be a private investigator. She works with the police, not against them, and doesn’t keep secrets from them.
Best of all, she has a dry sense of humor, required for a woman living with ghosts and a ten-year-old. And, that sense of humor even gets her through “Revisit your failed relationship week,” when she and the ghosts all have to deal with Old Haunts. Leave your disbelief behind. Pretend you believe in ghosts. You’ll certainly believe in Alison Kerby as a perfect amateur sleuth.
E.J. Copperman’s website is www.ejcopperman.com.
Old Haunts by E.J. Copperman. Berkley Prime Crime. ©2012. ISBN 9780425246207 (paperback), 290p.
FTC Full Disclosure – The publisher sent me a copy of the book, hoping I would review it.
Posted by Lesa at 4:00 AM

This is a series I truly enjoy and I'm looking forward to this installation.

Thanks for turning me on to this series! I just read the first one on Wednesday. It was really fun. I like the Jersey flavor. Have a good weekend.

If you already know and enjoy the characters, Mare, you're going to enjoy this one as well!

Thank you, Trisha. I'm glad you enjoyed the first book. And, I'm even happier with that comment, "Thanks for turning me on to this series." Hope to have a good weekend! I hope you do as well.

I enjoy a dry sense of humor so I now must try this series.

@Lisa: You got me started on this series, and I'm waiting for Old Haunts to be delivered. Thank you so much.

@E.J. Copperman: At first, I wasn't sure I would like this series, then I found myself buying the second book. I guess I like it! LOL! (As you can see from above, I have the 3rd book on order.) Thank you for the reading pleasure.

My pleasure, Bev! I'm glad I got you started. And, I hope you enjoy it, Sue.

Hey, Bev: You're more than welcome. Thanks for reading.

I believe in ghosts - no need to pretend! This sounds really good. I haven't read any of the books in this series - can I start with this one? Thanks!

You can jump in anywhere, Karen--the books are written so you don't have to read them in order! Let me know what you think!

i love this series! I can't wait to get this one.