Coming Up for Air by Patti Callahan Henry 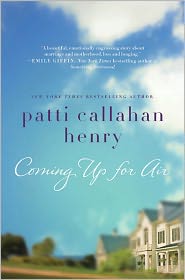 It’s been a while since I reviewed anything for Library Journal. Patti Callahan Henry’s Coming Up for Air was sent to them a little late, so my review appeared in LJ’s Xpress Reviews, online reviews, for Sept. 16, 2011. It’s reprinted here, with permission.
Henry, Patti Callahan. Coming Up for Air. St. Martin's. 2011. 272p. ISBN 9780312610395. $24.99. F
Once again, Henry (The Art of Keeping Secrets) digs into the past to uncover events that have repercussions for a generation. Ellie Calvin is 48 when her mother dies. It's only then that she begins to understand the rigid woman who told her how to live her life, right down to the man she should marry. When Ellie's old boyfriend, Hutch, now a historian, asks about her mother's work in the Civil Rights Movement in 1962, Ellie realizes she knew nothing of that year in her mother's life. Her mother's journal from that period reveals a secret love, so Ellie takes her future in her hands and heads to Alabama, looking for the romantic woman she never knew. It's a trip that forces Ellie to analyze her own life choices and reconsider her future.
Verdict: This one is for readers who enjoy women's fiction set in the South. The ending is predictable, but give it to everyone who hated the conclusion of Anne Rivers Siddons's Burnt Mountain. This novel—with a little history of the Civil Rights Movement, a little romance, and a taste of Southern life—will leave them satisfied. [Library marketing.]—Lesa Holstine, Glendale P.L., AZ
Posted by Lesa at 4:00 AM

This was my first of hers, and it was pretty satisfying to me, especially as a huge fan of Southern fiction.

And, she just moved to my neighborhood! :)

A friend recommended Anne Rivers Siddons enthusiastically but her books didn't resonate with me. So, I'm not sure about Henry. Maybe I need the touch of murder that Elizabeth Lynn Casey adds.

I read Burnt Mountain. It's not my normal type of book but it got such interesting reviews that I picked it up. I loved it. The ending was a little "huh?" but I loved that too. I like something I can mull over and wonder. Not everything in life has straight answers. Not sure I'd pick up this book but you never know.

Coming Up for Air was a Goodreads win for me. Women's fiction isn't my normal reading genre, but I thought the story line was intriguing.

I am so glad I read it because I loved it and thought it was one of the best books I've read in a long time. And I told anyone who would listen about it, too. There was just so much of it that hit very close to home for me.

I hope you enjoy it, Kathy.

That's so neat that she just moved to your neighborhood. I'm a fan of women's Southern fiction. As I said, I liked this one, must better than Siddons' latest.

I'm so glad you loved Burnt Mountain. I loved it, until that ending. That ending didn't work for me at all. It wasn't that it didn't make me think. I couldn't figure out what the heck she was doing.

I'm glad you liked Coming Up for Air. I really appreciated the sections about the Civil Rights Movement. I found that fascinating. I enjoyed the book, just found the ending a little too pat.

I'm not a big fiction reader, but purchased this when a friend recommended it highly, saying it helped her understand her own overbearing mother. Hoping to gain similar insight, I bought the audiobook.

I did not find anything compelling about Ellie and I didn't find any help with my own mother problems.

And what the heck is "women's fiction?" Shallow, predictable romance novels? If so, I'll know not to venture into this genre again.

Maybe this is a book for women who, like Ellie, have too much time on their hands and no real direction.