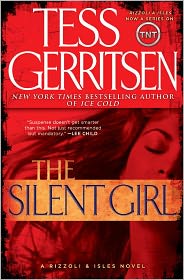 I had the temptation to write this review “Jeopardy” style giving you the answers and then you finding the corresponding question.  Why?  Because there is so much detailed information given in Tess Gerritsen’s tenth entry in the Rizzoli and Isles mystery series.
First of all, the book is written mostly from the point of view of Boston Homicide Detective Jane Rizzoli, but occasionally it switches to another character.  While firmly rooted in today, the book refers often to events from 19 years ago.  Multiple families and detectives are involved.  There are three distinct lines of crime interwoven with each other.  If I had this book as an assignment to write, I think I would have a huge white board covered with scribbles to help me keep everything straight because as the author, I wouldn’t want to confuse the reader by slipping up even once.  As a reviewer, I made a mini version of just that, and it measures 8 ½ x 11 inches.
I hope I haven’t scared you away.  In the end, I didn’t need my “cheat sheet,” and neither will you.  Tess Gerritsen is a master of storytelling.  The fact that she can tell a multi-level story in multiple layers of time and bring them all together in the end shows how phenomenal an author she is.  And these aren’t just nice stories about the weather.  These are solid mysteries with lots of suspense and thrills that tingle your spine and set your hair on end.
In today’s time period, we are quickly introduced to murder.  A severed hand is found on the street in ’s , so the homicide squad is called.  It is dark, but Jane Rizzoli and her partner Bobby Frost go up to the roof of the nearby building where they find the body the hand belonged to with its throat almost slashed through.   The people in are fearful and say many ghosts live there.  By dawn medical examiner Dr. Maura Isles is checking over the body to allow it to be moved.  One thing beyond the obvious stands out as unusual – several silver strands of hair on the victim’s black clothing.
The victim had a GPS unit with two locations input – one is for retired Detective Lou Ingersoll’s home where we are introduced to one plot pointing to the past – the disappearances of many young girls over 20 years ago.  In addition, by the time Jane and Bobby reach Ingersoll’s house, he has been murdered.  The perpetrator is just fleeing the scene so Jane and rookie Detective Tam chase after him for several blocks when Jane suddenly receives assistance in stopping the perpetrator and saving her own life.  She sees the same face Bobby Frost saw on that rooftop of a tall monkey with a black face and silver hair and carrying some kind of sword that makes a swooshing sound through the air when used.  Now Jane begins to doubt herself until Bobby verifies her story and pulls a few of those silver hairs from her blood-soaked clothing.
Getting back to the lab with Lou Ingersoll’s body, both Bobby and Jane talk with Maura Isles.  She does not help them feel any better.  She has just received word from a wildlife institute where she sent one of those gray hairs; they belong to a monkey.  When the three look up a photo, it is exactly what Bobby and Jane have seen.  Seeing the same photo, Detective Tam walks over to them and explains the Chinese legend of the Monkey King.  “He is from sacred flesh and travels to heaven to learn the wisdom of the gods, but he gets into all sorts of trouble.  He is not evil, just impulsive and mischievous, like a real monkey.”  There are many, many stories of him doing both good and causing trouble.  Almost like fairy tales or today’s superheroes.  Now we have all learned something based in the past intertwined with something in the present day.  It gives me chills.
The second entry in the GPS unit of the murdered woman from the rooftop was that for the Dragon and Stars Martial Arts Academy run by Iris Fang.  All are surprised when she acknowledges that she knows Lou Ingersoll.
Criminal psychologist Lawrence Zucker puts the detectives’ confusion straight when he explains the biggest piece from the past, one that retired Detective Ingersoll was looking into . . . Nineteen years ago there was a massacre at the Red Phoenix Chinese Restaurant.  The owner and cook, Wu Weimin, came out of the kitchen and killed his waiter and friend, James Fang, husband to Iris Fang.  Customer Joey Gilmore, waiting for his boss’s takeout order, was shot in the back of his head; Joey’s boss was a man connected to organized crime.  Diners Arthur Mallory, CEO of an investment firm, and his new wife Dina Mallory were murdered next.  And then Wu Weimin shot himself.  Weimin was a married Chinese illegal immigrant whose wife and daughter disappeared quickly after he died.  According to Zucker, this was a case of “amok” followed by suicide.  Jane described it more like “going postal.”  Somehow Ingersoll saw a connection to the fact that Laura Fang, then 14 years old, vanished two years before her father died.  Charlotte Dion, daughter of Dina Mallory, disappeared while on a school field trip at age 17.
There is more investigation into the girls disappearing, but I don’t want to spoil the story or the ending of this awesome mystery.  There are many, many more details, clues, and investigation into all the aspects of the massacre and Ingersoll’s death.  How Tess Gerritsen ties them all up, quite satisfactorily, too, is amazing.  We even learn more about the monkey king.
I have always been a fan of Tess Gerritsen’s writings.  From the first suspense/thriller she wrote, HARVEST, I have enjoyed her books.  They have all been impressive.  THE SILENT GIRL is no different.  It is a spectacular work of art, a magnificent novel.  I don’t think the girl was quite so silent after all.


Tess Gerritsen's website is www.tessgerritsen.com.
Posted by Lesa at 4:00 AM

Wow, I loved the idea of the white board notes :-)

I decided I am going to read this series in order. I only picked up the first The Surgeon in July, loved it.

I look forward to following this series and seeing how TessG grows as an author also.

I really wish I could have shown you Sandie's cheat sheet for this book. It was so funny. Really did look like a white board.

Tess Gerritsen has long been a "must read" author for me. Thanks for the review!

You've made this multi-level book with a complex plot sound like the perfect "sink into it" read. Thanks, Sandie.

OHHH-I can't wait to read this but I don't know if I can wait until it's a 3-week at the library!

Maybe I can find some money to afford the hardback!

Tess is one of my "must read" authors.

Passed your idea of cheat-sheet along on Murder She Writes.
http://www.murdershewrites.com/2011/08/23/the-traits-of-a-useful-companion/

Lesa,
You are a sweetie. Thank you very much for the balloons and the celebration of my ?? birthday!! Hey, I can't list my age - a review can't have everything in it or there's no reason to read the book! (It's not there either, and I've bribed Tess (kidding).

Marce, I would strong suggest you read THE SURGEON and THE APPRENTICE in order. After that, they could get mixed up without spoiling things, but as always, a series is written in a certain order for a reason - only the author knows. With Tess's books, I'd say those first two really must be in order.

Don't forget, you can always go back to Tess's first four suspense novels - HARVEST, LIFE SUPPORT, THE BONE GARDEN, GRAVITY - in any order. The first was HARVEST, and if that doesn't scare your socks off, nothing will.

Oh, and the white board is really true. When I find myself starting to turn pages back to remember something or run across a cast so large that I can't remember who was related to who and how, I pull out a sheet of paper and begin taking notes. Never presented in order, the notes start to wander and cross over each other and in the end only you know what they say. That's OK. If it makes reading the book more enjoyable, go for it!
Sandie

Thanks for not revealing my "white board" in reality. I don't know if I would have recovered from blushing. :) Even tho I do strongly believe in taking notes, I would be a bit embarrassed to share ... altho these are pretty tame compared to what I've done before.

I absolutely LOVE the balloons and the sparkles and the wonderful wishes that are behind them.

Jenny,
Tess is a "must read" author for me as well. I asked Lesa if I couldn't review this even tho we are a bit beyond publication date (which thankfully Lesa doesn't follow strict law around). I couldn't let a possibility go by to share her books with others.

Thank you for reading this and letting us know. If you'd like to drop me a line once you've read it, I'd love to hear from you.
Sandie

Elizabeth,
Thank you for a lovely way of summing up my review! I think that really says it.
As mystery readers, we look for a mystery, a problem to solve. We are delighted when two plotlines intertwine, if they're well done, and we try to solve both questions at once. With this, there were even more, and you might be tempted to not read it because it could be too hard and you read for pleasure. I want to assure you that it was simply that much richer. Very, very good and very engrossing. I hope you enjoy it.
And I'm going to pick up your book that Lesa recently reviewed, too!
Sandie

Sandi,
I can't advise you whether to buy or borrow the book, but I sure hope you find a way to read it.
If it's any help, Tess has the first two chapters up on her website at http://www.tessgerritsen.com/ or many online bookdealers offer "samples" of a chapter or two to entice you to read the book.
I never get these! I don't because I know then I won't be able to wait! Then I'm into the plot (it the author is good, which isn't a question here)and it's too hard to stop.
If Tess is becoming a must-read author, this would be a good book to start a collection with.
Tess says this book is the most personal to her. Read the interview on her website.
Sandie

Liz,
Thank you. At least you aren't demanding evidence yet!! I wouldn't mind (despite the fact that I'd blush) because they're so useful! I did actually scan mine and send it to Lesa so she could see what I'd done. I may start a file for them now. :)
Sandie

With Sandi and Sandie, I need a cheat sheet here! Thanks for review and always enjoy comments.

WOW - what a detailed review!! We 'talked' about this before, so you know I've already added it to my TBR list~~~

Thanks for the review.