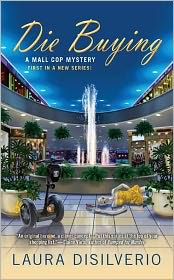 In Die Buying, Laura DiSilverio gives us an amateur sleuth with a reason for investigating, a sleuth with some skills, and a book with touches of humor. She's kicked off a series that could go far.

It's quite a comedown for E.J. Ferris to be a mall cop, but she's making the best of it. She's an ex-military cop whose knee and lower leg were mangled by shrapnel from an IED blast. After rehabilitation, she moved to Virginia, where she could be near her Grandpa Atherton, a former CIA operative, with unusual ideas as to how he should keep his skills up. Unfortunately for E.J., no police department wants to hire someone with her leg problems. A job as a mall cop, riding a Segway, is a last resort.

It's bad enough to start the day discovering that someone has released all the reptiles from the Herpetology Hut. E.J. assumes screams are from someone who found one of the loose lizards or snakes, but it turns out there's a dead man, naked, in the window of a boutique. Now, she has to deal with the hard-nosed homicide detective Anders Helland, who thinks a mall cop is good enough to bring him sandwiches, but not smart enough to assist with the investigation.

Once Helland asks E.J. to be his mall liaison, though, she's determined to use her knowledge to find a killer. The police might close the case, but E.J. has pictures, friends around the mall, and her grandpa and his gadgets to assist her.  And, she's determined to prove to Helland "that an ex-military cop could detect as well as he could. Better."

E.J.Ferris is my type of amateur sleuth, a smart, independent woman, who does turn information over to the police. And, I like it that E.J. is very much aware that she doesn't have access to the same tools and information as the police do. She uses her brains, and her connections, including her grandpa, to help her in her investigations, both for mall cases, and the murder case. In fact, E.J.'s grandpa is an asset in the mall cases. He and his gadgets are the welcome humorous additions to the story. Laura DiSilverio introduced a character to appreciate and root for in Die Buying.

Note: On July 29, Laura DiSilverio wrote a guest post here. She ended it with, "I’m donating the profits from this book to the Wounded Warrior Project that helps injured veterans because EJ’s a vet and my husband and I are both veterans and it’s important to care for the military members who sacrificed so much for this country."

This book sounds like a fun read! A mall cop riding a segway ... what could be better? LOL.

Happy Thursday, Beth! This was a fun read, with my kind of amateur sleuth. I really liked this character.

This was my guilty pleasure purchase at Borders on Tuesday (guilty because when I go to Borders and purchase things at the discount, I feel like a vulture.) I'm really looking forward to reading it. I may have to move it higher up on the schedule.

This sounds like fun! Thanks for the tip, Lesa. :)

Sounds like another good cozy...augh..I can't keep up with them! lol

Can't wait to read Die Buying and to backtrack to the Swift mysteries.
Best wishes to Laura personally and to her Wounded Warrior contribution.

And Lesa, what a joy to have found your blog.

I know what you mean, Booklady, but I'm still glad you purchased the book. It's worth moving up on the TBR pile.

Me, neither, Kris. But, this one is one of the better mysteries I've read lately.

I'm so pleased you found it. Thank you for the comments you make. I appreciate your insight.

Hi Lesa -- Laura's my guest blogger today, talking about gifting readers with a sense of fun. Join us if you can: Patricia Stoltey

Thanks, Patricia. I'll stop by.

Sounds like a promising start to a new cozy series - adding it to my tbr!

Thanks
Shelleyrae @ Book'd Out

You're welcome, Shelley. It was a promising start. Hope you enjoy it!

Thanks for the review!

You're welcome, Harry. I hope you get a chance to read Die Buying.