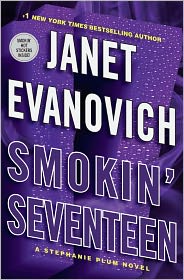 I'll admit I thought I'd given up on Janet Evanovich and Stephanie Plum a couple books ago. The books were starting to feel stale, and nothing new seemed to be happening. So, I picked up Smokin' Seventeen thinking I might get through a few chapters and quit. Instead, there were a few new twists to the story that made me laugh again at Stephanie's antics.

Vincent Plum Bail Bonds is working out of a motor home on an empty construction lot. Except the lot isn't empty. First one dead body, and then another, is dug up on the lot, and they all seem to have business connections. But, after the first couple corpses, the next ones seem to have a connection to Stephanie. She's too busy to worry about a creepy connection to a killer, though. She's trying to bring in a man who claims he's a vampire, Morelli's grandmother has put a curse on her, and Stephanie's own mother is trying to fix her up with Dave Brewer, a former high school football player who cooks. And, oh, yes, there's the crazy woman who ran over her husband, and tries to catch Stephanie in the parking lot to run her over. Who has time to worry about some killer who leaves her notes?

Evanovich has filled the book with a little of everything that makes these books fun, and funny. Stephanie is still torn between Morelli and Ranger, but, now, all the women she knows seem to be rooting for Dave, a man who cooks. Of course, there's a scene with Grandma Mazur and a funeral home. And, Lulu is as funny as ever. Over the course of the series, the exploding cars became a little too much. However, this time, Ranger pointed out the humor in the whole situation. Stephanie points out she always destroys the cars he loans her. He agrees, but says, "Working at Rangerman is a high-stress job, and you're one of our few sources of comic relief. I give you a car and my men start a pool on how long it will take you to trash it. You're a line item in my budget under entertainment."

Comic relief. Entertainment. This time there actually is a little mystery thrown in. Who is killing people, depositing them at the construction lot, and what's the connection to Stephanie? Smokin' Seventeen might just be the perfect comic relief for a hot summer day.

I'll have to give this a try again. I opened the book at the bookstore, saw the same old Grandma Mazur antics, and closed the book. Glad there are some new twists.

A couple new twists, Harvee, enough to keep me reading this time. And, two books ago, I didn't find anything funny. Didn't even get past the first chapter in Sixteen.

I quit reading these before you did. I thought they had gotten stale too. The early ones were fun, even for an old man like me.

If this comes available at our library, based on your review, I might try it. We have electronic checkout at our library. Sometimes you have to wait a long time for popular books like these.

Unsure which Plum I tried, mostly out of a sense of being ignorant--that is, never reading the 21st Century Christie or Sayer. Not my type of humor, however, so not sure I'll try again soon.

Thanks for the review, Lesa, my mother will be very happy with you! We share a lot of books, and she saw that 17 was out. I told her I refused to buy the hardcover and she should just re-read one of the earlier ones. This gives both of us hope. Really, Stephanie, Grandma Mazur et al are fabulous characters, and fun to watch get in and out of predicaments. It's good to know they're back in form!

PS: Also read Chihuahua of the Baskervilles this weekend. GREAT recommendation! Look forward to reading her next.

I thought this book was fun too, but do think her formula is getting a little stale.

I have been a long-time fan of Ms. Evanovich's Stephanie Plum series. There have been some I have liked better than others, but overall I kept reading. I agree with you on #17. It just feels fresher than the last 2 or 3. I think maybe her agent and/or her publisher had a talk with her. What I find interesting, is that #18 will be coming out in November of this year. Two Plums in one year....something to think about.

It's a might try it, Joe. I don't know at what stage people got tired of the same old Stephanie. The new guy, Dave, was a change. Connie out of the office is funny. I guess I just found it a little better than the last few books.

Stephanie Plum definitely isn't for everyone. But, those who love the books, REALLY love them.

I'm glad you read Chihuahua and liked it. I booktalked it the other day, and think I sold some of the librarians on it, particularly one who has Chihuahuas. (smile)

It's a good cast of characters, and the few changes in the office and Stephanie's love life might add something. And Morelli's grandmother adds some comic relief this time.

You're not the only one who thinks the formula is a little stale. This one just seemed to have something different for a change.

It does make you wonder, doesn't it, Bev? It seems a little rushed to have Eighteen out so soon.

Having just finished 15 and 16 (16 was so awful I ranted on LT about it, but couldn't bear to waste blog space on it) after a long hiatus, I think I'll pass on 17 for awhile. Glad to hear there's something new, because they were just getting to be way too same-o same--o. Thanks for helping us put these into perspective.