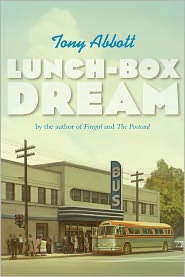 Tony Abbott's Lunch-Box Dream is a disturbing, at times beautiful, emotional story of two young boys, a troubling journey, and prejudice. Abbott based the story on a trip he himself took as a child, a trip that must have lingered in his memory. Unfortunately, as interesting as the story is to an adult, I think it's going to leave its target audience lost and confused. Lunch-Box Dream is marketed as a book for readers ten to fourteen, I don't think they'll understand the history and the emotional tension in this story.

Most of the story is seen through Bobby's eyes as he and his older brother Ricky, along with his mother and grandmother, drive from Cleveland, Ohio to Florida. Bobby's grandmother is returning home after her husband's funeral. As a treat for Ricky, they stop at Civil War battlefields along the way. It's not such a treat for Bobby, whose troubled by confusing thoughts of his grandfather's death, Abraham Lincoln's coffin on his funeral train, and the battlefield deaths. While Ricky is enthralled, vividly describing the battles, Bobby is disturbed and haunted by his thoughts. And, he's too young to understand the emotional undercurrents of this trip.

However, another story is interwoven, the story of the Thomas family, a Negro family from Georgia. Their story is told by various family members up to the point when they realize a child is missing.  Bobby is a typical white child of his time, 1959, with no experience with blacks, and a fear of the people he calls "chocolate." But, an accident brings Bobby's family to the same bus station where the Thomases are trying to get a ride. And, it's no surprise that Bobby, who has been fighting his emotions on the trip, often unsuccessfully, is the one who realizes how much people are alike, no matter what the color of their skin.

It's difficult to know who to recommend this book to. Most young people will not understand the history of the period with the Jim Crow laws and the racism. They will probably not understand the emotional problems in either family. This is a beautifully written book. I've never read a description of Abraham Lincoln's funeral train that chilled me the way Abbott's short three page description did, as Bobby imagined it. And, the final bus scene was moving. It's a thoughtful story. Maybe I should just recommend it here, for those readers who are willing to take a chance on a book marketed for youth. Lunch-Box Dream is a story that will touch and move adult readers.

I find it interesting that the child from Ohio had no experience with African Americans and wonder if that's realistic. There is another book with a similar theme - The Dry Grass of August - that I've heard is very well down.

It is realistic. This was set in 1959. He did "see" African Americans, but he never had a direct encounter with any. I'm from a small town in northern Ohio. Until I went to college in 1975, I never even spoke to an African American, except when some NFL football stars came to our school when I was in high school. I saw them in the city west of us, but I grew up in a town that was entirely white.

Hello, Lesa. Thank you for your close, heartfelt, and critical review of the book, and also for your defense of its realism. I didn't recall that you were from Ohio, too, but appreciate your own story of segregation while growing up in the "free" North. Honestly, I was never sure that I was writing a book for children; I think the readership is there, somewhere, but I'm happy enough to have sensitive readers like you take a look and talk about it. All my best . . .

Age has never seemed to me a useful criterion. A book read to us in childhood is transformed when read to a child.

It seems to me sufficient that you believe Lunch-Box Dream to be moving.

Thank you, Tony. Oh, yes. Those stories of northern Ohio are true. I know that for a fact. You're welcome, and, if you come back and read Liz' comment, you'll see that there are readers who feel it doesn't matter what audience might be targeted. Good luck with this. It is a moving book. I didn't want to discuss the final scene with Bobby that also moved me since that would have been a spoiler. But, his imagined story of Lincoln's funeral train was powerful. Thank you.

Thank you, Liz. Very wise. Yes. The hearing of a story, or co-reading with parent or adult and child can add so very much to the reading experience. A chance for the child-listener to ask — what does this mean? Or . . . why did she say this? — is invaluable to both reader and young listener. Thank you for saying that. I feel disheartened sometimes when I think the book will not find its way. Best wishes!

Tony, I hope you won't be discouraged. Among other things, you have a strong ally in Lesa.

As you said, Liz, I hope Tony isn't discouraged. I have the feeling this story is personal and means a great deal to him.