A Turn in the Road by Debbie Macomber 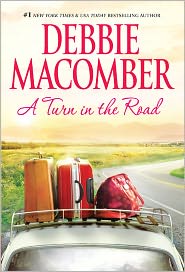 Debbie Macomber's A Turn in the Road is the eighth book in her Blossom Street series, and, in my opinion, the best in the series since the first book. This time, she takes characters out of Blossom Street, injecting some new life into the series. Since Macomber and her husband drive from Washington to Florida every year, she took her characters on that same road trip.
Bethanne Hamlin was introduced in A Good Yarn at the time her husband left her for a younger woman. Bethanne pulled her life back together, and built a successful party business, Parties, from scratch. She has five stores in the Seattle area, with possibilities for franchises in the future. She's quite content with her home, her business, and her friends in the community. She's helping her son plan his wedding, and her daughter, Annie, is one year away from her MBA. The only fly in the ointment is her ex-husband, Grant, who is now divorced from his second wife, and wants to get back together with Bethanne.

Bethanne still has a warm relationship with Ruth Hamlin, her ex-mother-in-law. When she sees her one day at a cafe, she stops to visit, only to learn Ruth has plans to drive across country to Florida for her 50th class reunion. Impulsively, Bethanne offers to drive with her, thinking she'll have time to ponder her relationship with Grant. When Annie's boyfriend unexpectedly leaves for Europe, she wants to escape, and offers to go too.

Each woman has a reason for going on this trip. Bethanne wants to think about Grant, and the possibility of a life with him again. Ruth hopes to meet up with a high school sweetheart, although, at the same time, she fears meeting him. And, Annie just hopes to leave thoughts of her old boyfriend behind, while encouraging her mother to reconsider life with Grant.

All plans are thrown out the window when Annie encourages them to visit Grant's hometown. It's there that Bethanne meets Max. He appears to be just another biker to Ruth and Annie, and they're terrified when he shows up later at a lake where they were stranded. But, there's more to Max than meets the eye, and Bethanne seems to understand that. So, how can she make a decision about Grant when she's enjoying her time with Max?

A Turn in the Road is a wonderful story of three women seeking answers. It contains all the humor and romance you'd expect from Macomber, along with the interesting road trip. Although I started out as a fan of Bethanne and Ruth, Bethanne thought, "Annie added spontaneity and adventure to the trip." She did, and, without Annie, this trip wouldn't have ended up the way it did. As I said before, this book is one of my favorite Macomber books. Bethanne Hamlin deserved happiness, and it was wonderful to see her happy ending.

Oh, I love Debbie Macomber. Her books are like a warm hug. I'm glad to hear good things about this one. I've loved the Blossom series and, like you, have liked some more than others. This one sounds like a perfect summer read.

Hope you are having a great trip!!

Wasn't going to read this one, the last one was so bad, but after your review I'll reconsider.

Thanks for this review. Like CindyB, I was going to pass on this one because the last book I read by Macomber was not all that great, but I did enjoy the others in the Blossom Street series, and after reading your review, I think I will enjoy this one, too.

I promise, everyone, this book is much better than the last Macomber, which I think was just a rerelease of an early novella, it felt so old-fashioned and short. Let me know what you think after you read it.

Glad to see this series is still going strong. I haven't read the last several but this is a series I enjoy so I hope to get caught up soon.

There was quite a "turn in the road" in this story. They are on their way to Florida, pass through Vegas, then the Grand Canyon, then Texas. How is it possible to be in Texas one day and by car be in Branson Missouri the next? NOT. And even if it were possible,,,why, when it is the opposite direction from Florida? That is crazy!

Three women all at different places in their lives, all facing some important decisions. Bethanne's ex-husband has made it known he wants her back now that his second marriage has fallen apart. Can she forgive him for all the pain he has caused her? She is no longer the same woman he left behind. Annie thought her boyfriend was going to propose marriage and instead he broke her heart by telling her he was going to travel Europe with friends for a year, just expecting her to wait for him. Ruth is going back to see old friends, but there is one special friend she really wants to reconnect with so she can apologize for for hurting them.

Bethanne and Annie decide to travel cross country with Ruth to give them time to make the right decisions and with them going along Ruth's daughter can't keep her from a trip she has been planning for almost 50 years. Packed up and with their route mapped out they head out for the trip of a lifetime. But "A Turn in the Road" can make a well-planned excursion have a few unexpected surprises. This turns out to be a trip that will change the lives for several people, especially Ruth, Bethanne and Annie.