Classified as Murder by Miranda James 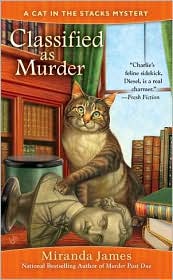 Miranda James' Cat in the Stacks mysteries top my list for pleasure reading. As I said when I reviewed the first book, Murder Past Due, give me a Southern setting, a librarian sleuth, a wonderful cat, and an intriguing mystery, and I'm happy. This time, in Classified as Murder, James takes his characters into the world of rare book collecting. The book is a delightful treat for mystery fans.
When Charlie Harris volunteered at the public library in Athena, Mississippi, he frequently helped James Delacorte, an octogenarian with eclectic tastes in reading. Charlie was a little surprised when Mr. Delacorte asked him to help with the inventory of his rare book collection. He thought some books were missing, and he suspected family members.
Before Charlie could even start the job, his own son showed up, asking if he could stay away. Delacorte's family isn't the only one with problems. The relationship between Charlie and Sean is quite strained, and it takes a while for the two of them to have an important discussion.
In contrast, Charlie finds a strange situation at Delacorte's house when he sees the library for the first time, and goes to tea. He and Diesel are both appalled at the outrageous behavior of Delacorte's family. One woman dresses as if she were living on an antebellum plantation, and isn't quite in the real world. The nurse in the family is quite cold; one suffers from unknown ailments, and all of them have a tendency to argue in front of strangers. And, when Charlie finds Delacorte dead at his desk, he and Diesel are once more caught up in a murder investigation.
What's any better than an eccentric family in a traditional mystery? It's fun to meet Delacorte's family, but it's even more fun to get to know Charlie's son, Sean. James does an excellent job exposing the weaknesses in both families. The author includes some information about rare books, which is always fascinating.  And, Diesel plays an important role in this book, as we get to know him a little better as well. I still have the same complaint I had with Murder Past Due, and it's not the author's fault. That is not a Maine coon cat on the front of Classified as Murder. Saying that, anyone looking for a solid traditional mystery, a likable protagonist, and a wonderful cat, won't go wrong if they pick up Classified as Murder.
Miranda James' Cat in the Stacks website is http://www.catinthestacks.com/
Classified as Murder by Miranda James. Berkley Prime Crime. ©2011. ISBN 9780425241578 (paperback), 304p.

This sounds like a fun series. I need to get the first one.

I don't think I understand why it's so hard for book covers to be accurate to the story. How much trouble could it be to put the right breed of cat on the cover? LOL

I agree with you, Kay, and I know James has tried to get the publisher to change the cover. I went ahead and included that gripe because I had done a whole blog post about "Pet peeves," beginning with not getting the right breed of cat on the cover, emphasizing this book. James even sent it to the publisher.

I have a good working relationship with Berkley, but I'll be darned if I will keep my mouth shut about that cat. It doesn't look like Diesel.

I'm looking forward to this one, I love Diesel. And while the cat on the cover is gorgeous, I agree with you - it's not Diesel!

I read the first one and loved and am looking forward to reading this one. Thanks for turning me onto a new series and a new author

I'm excited about reading this one...you summed up why I'm excited in your 2nd sentence. :)

And, you and I would know that, Ingrid. (smile) And, Diesel has a bigger role in this one. You'll enjoy it.

My pleasure, Page! I'm glad you're enjoying it.

Thanks, Elizabeth. That's a great summary of this series.

Lesa: my belated thanks for your lovely review of the new book. I've been sidelined by a very bad cold and a gastric infection, so I haven't been around on the internet lately. A review like this certainly perks me up!

I love this series. I'm a cat lover (and dogs and horses and almost any other critter) so I take great pleasure in Diesel's role.

Ah, Dean. And, all the lovely comments by my readers should have cheered you as well. Take care of yourself. I hope you have a cat or two who will snuggle when you're not feeling well.

Diesel does have a great role, doesn't he, Carolyn? He's a cat. As I said before, he understands, but doesn't speak human language, or act other than a cat would. That's good!

Glad to see this was a great follow-up to the series. I still plan to get to the first in the series..one of these days.

I understand that "one of these days," Kris. Hard to read everything.