The Bride's House by Sandra Dallas 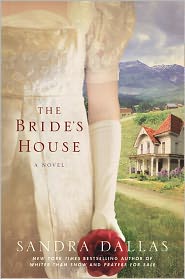 I'm a big fan of Sandra Dallas' books. Three of her books are some of my favorites, The Persian Pickle Club, Tallgrass and Prayers for Sale. I wish I could say the same about her new book, The Bride's House. I know how personal the book is to her, since she used her own house as a model for the house in the story. But, none of the women in this book came to life for me, as the ones in previous books did.

The Bride's House is the story of three generations of women who love a house in Georgetown, Colorado. Seventeen-year-old Nealie Bent was a runaway from a drunk, abusive father when she ended up in the mining community of Georgetown in 1880. Fortunately, Mrs. Travers, a woman who owned a place for men to eat, hired her, or Nealie might have ended up working the streets. One of the miners, Charlie Dumas, courted her, but once Nealie saw engineer Will Spaulding, she only had eyes for him. But, things didn't go according to Nealie's plans, and she ended up moving into the new mansion she called the Bride's House, married to someone else.

Nealie's daughter, Pearl, never knew her mother, except for the stories her father told of his saintly wife, and the more realistic stories the housekeeper, Mrs. Travers told. But, Pearl's father doted on her, and did everything he could to keep her in his late wife's beloved Bride's House. He thwarted any would be suitors, and turned away the one man Pearl loved. He just didn't count on his daughter's will.

Each summer, Pearl's daughter returned to Georgetown. Susan loved her grandfather, and the house he refused to leave. And, since she had been a child, she loved a Georgetown boy. But, each summer she had to prove herself to the locals, and she never thought her love was returned.

"The old house had its secrets." In reality, the women of the Bride's House, along with Susan's grandfather, had secrets. They had secrets about love and men and children. Dallas' story is one of three generations of women fighting for, and, not always finding the love they expect. Unfortunately, The Bride's House lacks passion. The women seemed to accept the consequences of their fates. Yes, they all suffered, but none of them, not Nealie, or Pearl, or Susan, actually fought for their future at the time they should have. Someone else always stepped in to determine their fate. Perhaps that was the issue I had with the book. Each woman waited for someone else to make their decisions for them.

*****
FTC Full Disclosure - I requested, and received, an ARC from the publisher so I could review it.
Posted by Lesa at 4:00 AM

Sorry you didn't love this. A friend of mine loves Dallas's work, but I haven't tried it yet. I don't think I'll start with this one.

I do love most of Dallas' work, Kathy. Start with The Persian Pickle Club or Tallgrass. I think those two are her best.

Sorry you didn't like this one. I think the story sounds wonderful and wonder how I would like it since I haven't read her other work. Yet...I'm more tempted to read one of the ones you loved since I feel I like them better.

Oh, it was OK, Kris. But, as you said, I just didn't love this one. You might enjoy it. I always say, this is my opinion, and others may not agree. But, if you haven't read her, I do suggest Tallgrass or The Persian Pickle Club.

herbal supplementation is the best because i love organic supplements and herbal is organic,. prettyrobes