Lost and Fondue by Avery Aames 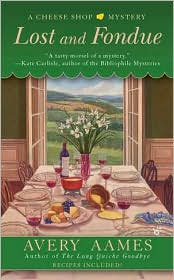 Avery Aames' first Cheese Shop Mystery, The Long Quiche Goodbye, is a finalist for an Agatha Award for Best First Novel. In Lost and Fondue, she takes readers back to the fictional town of Providence, Ohio, where Charlotte Bessette, owner of Fromagerie Bessette, the cheese shop, is once again up to her neck in a murder investigation. It looks like Aames has another hit on her hands.
Charlotte's best friend, Meredith, had the idea to convert the Ziegler Winery into a liberal arts college. How much can go wrong with a fundraiser in an old building where there are rumors of hidden treasure? The actual question is, does anything go right?
Meredith is dating Charlotte's cousin, Matthew, who owns the wineshop attached to the cheese shop. He's also the father of twins, divorced from a woman who abandoned the girls and left for England. But, the day of the fundraiser, Sophie shows up, making an elaborate show of wanting to spend time with her "babies." Meredith's brother, Freddy, is responsible for a small group of art students, including his daughter, Quinn, who have painted in the winery. They seem like a high-spirited group of young people. But, everything falls apart that evening. Charlotte watches too many people argue at the reception, including Quinn and her boyfriend, Harker. Charlotte thinks it's a case of anger and hormones. Matthew argues with his ex-wife. Freddy argues with Harker. But, when Harker ends up dead in the cellar, Quinn is suspect number one on the police chief's list.
Charlotte's employee and friend, Rebecca Zook, pushes her to investigate. And, of course, Meredith begs for her help, insisting Quinn is innocent. Once again, Charlotte uses all of her local knowledge to snoop around, going a little too far at times. Will that snooping land her in a sticky situation?

Fans of Aames' The Long Quiche Goodbye will be just as pleased with the latest mystery. All of the favorite characters return from the previous book, Charlotte, her friends, and her enchanting family. This time, there's a large cast of suspicious characters. And, just as before, cheese lovers will find it hard to resist all the references to delicious flavors. My suggestion? Settle in with a nice cheese, a glass of wine, and enjoy Lost and Fondue.

Enjoyed The Long Quiche Goodbye and looking forward to Lost and Fondue.

Glad to hear the 2nd in the series is just as good as the first. I still haven't read the first..but plan to.

It's good to meet up with all those fun characters, Liz. I hope you enjoy Lost and Fondue.

Oh, you'll get around to it, Kris, when it works its way up the TBR pile.

I'm looking forward to this one, of course! :) Great characters in Avery's series.

I would imagine you are looking forward to it! Yes, she has great characters. And, I'm hosting her at the library next Thursday!

This whole of the story is very beautiful such that it is giving the entire real story. Meredith is dating Charlotte's cousin, Matthew, who owns the wine shop attached to the cheese shop. He's also the father of twins, divorced from a woman who abandoned the girls and left for England.

You're right, Tim. Thank you for summarizing it.