An Uninvited Ghost by E.J. Copperman 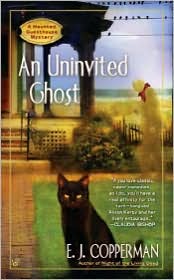 I probably read 75-100 mysteries a year, at least half of my yearly total of books. But, E.J. Copperman got me good in his latest Haunted Guesthouse mystery, An Uninvited Ghost. The killer made perfect sense, but I never saw it coming.

Since Alison Kerby's guesthouse on the Jersey Shore already had a reputation as being haunted, she decided to capitalize on it. She booked a tour group that promised guests a "unique" vacation, the chance to stay in a house inhabited by ghosts. Alison even had an agreement with Paul and Maxie, the resident ghosts, so they "appeared" at certain times of day. In return, though, Alison agreed to get her private detective's license, so she and Paul could investigate crimes. It was just a shame that the first case Paul brought her happened at her busiest time. The first tour group was there, and the director of a popular reality show booked the rest of the guest house. But, Paul's case brought nothing but trouble.

It seemed simple.  Another ghost, Scott, was afraid he had killed a woman he was only supposed to scare. It didn't take long for Alison to find her alive and well. First ghostly investigation successful, right? When the woman showed up at Alison's to participate in a séance, she ended up dead. And, it ticked Alison off. "It happened in my house, under my roof, to a guest I invited." Alison teams up with Paul and Maxie, as well as her daughter, Melissa, because Detective Anita McElone won't have anything to do with a case in which ghosts are involved.


The second book in this series, An Uninvited Ghost, is a triumph. Suspend your disbelief even more than usual. You have to accept that Alison Kerby can see and communicate with ghosts. All of the main characters in Copperman's latest mystery are well-developed, even the ghosts. Accept the fact that a protective mother, who didn't want to get involved in a dangerous case, would realize someone had involved her by killing a guest. The humor is delightful, particularly the reference to a guest reading Some Like It Hot-Buttered, a mystery written by Copperman under his actual name, Jeffrey Cohen. If you like ghost stories mixed with your mystery, try this Jersey Shore mystery, An Uninvited Ghost.

This is one on my TBR list. Great review, Lesa--so cool that you didn't see the end coming! I love it when I'm surprised at the end. :)

Yes, never saw it coming, Elizabeth. You'll have to let me know if you did when you read it.

I hope to get this book ASAP. JUST finished reading the first in the series and it was so entertaining. I suspected the murderer but was not positive..I like that in a book. Also some nice twists with the ghost element that I also enjoyed.

He does a great job with the ghost element, and it's even stronger in this book. I think you're going to enjoy it, Elizabeth.

This one is on my TBR list, too. Can't wait to read it.

Lesa, just wanted to say - Great pictures from LCC! One of these years I hope to get out there. But your posts brought it to life!

It's a fun mystery, Julie. Hope you get to it soon.

Thank you! I just had the best trip to Santa Fe & LCC. I'm glad the pictures turned out, and brought it to life. Loved being there.

I can't wait to get a copy of this one! I enjoyed the first one and it sounds like the follow-up is just as good.

Honestly, Kris, I think the follow-up is even better.