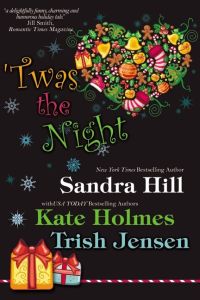 Who would plan a wedding in Snowdon, Maine for Christmas Eve, and expect out-of-town friends to be able to make it?  Well, maybe they can arrive in style on the Santa Brigade's bus, driven by a former NASCAR driver.  Sandra Hill, Kate Holmes, and Trish Jensen joined forces to bring three men back home in a fun, sexy Christmas romance, 'Twas the Night.
The authors came up with an interesting way of telling the story of three men, best friends who grew up together in the White Mountain Home for Boys in Snowdon.   In alternating chapters, each author tells the story of one of the men.  Hill introduces Blue Angels pilot Sam Merrick, trying to get from Philadelphia to attend the wedding of the man who bailed each of the boys out of trouble.  When the airport is shut down, the Santa Brigade's bus seems to be the only way to get to Maine.  It's a bus full of residents from a senior center who were spreading cheer and gifts to homeless shelters in the northeast.  And, the director of the center is Sam's high school girlfriend, Reba.
Sam's best friend is Kevin Wilder, known as JD, ex-cop turned bounty hunter.  Trish Jensen tells the story of his capture of Callie Brandt.  He has no way to get her to the nearest police station, unless he handcuffs her and takes her on the bus.  But, Callie becomes a favorite of the seniors on the bus, and JD finds her a little attractive himself.
The last arrivals on the bus are ex-football player, Stan Kijewski and Dana Freeman, a forest ranger.  George had asked Stan to pick her up for the wedding, but with the blizzard socking in the east, it seemed that the Santa Brigade would be the only vehicle making it to Maine.  Kate Holmes relates the story of the romance that blooms between Stan and the woman who always admired him.
Together the three authors put together a book that sparkles with hot romance and humor, while reminding everyone, including the passengers on the bus, of the needs of children and those in shelters.  It's something none of the three men can forget, with their past.   But, maybe a long bus trip and a Christmas Eve wedding can bring peace to three orphans in 'Twas the Night.
'Twas the Night by Sandra Hill, Kate Holmes & Trish Jensen.  Bell Bridge Books, ©2010. ISBN 9781611940022 (paperback), 260p.

*****
FTC Full Disclosure - The publisher sent my copy of the book, in hopes I would review it.

this does sound fun!
I'm a huge Sandra Hill fan, but not familiar with the others.

Once again you add to my tumbling TBB wishlist. How is one ever to recover *wink*
Thanks
Love & Hugs,
Pam

Brenda B. from Maine (where there is no snow yet)

Sharon, This is cute. I enjoyed the romances & the characters.

It's amazing how well the three authors worked together on this. I think it worked to have each of them concentrate on one of the romances, but the stories blend beautifully.

Oh, there's snow in this book, Brenda! And, with a book that ends in Maine, you might be interested.

It's going on my wish list. If my sons give me book certificates as they did last year, I have a big list already to buy.

Your sons are very wise, Bev! That's great to have the list ready to go!