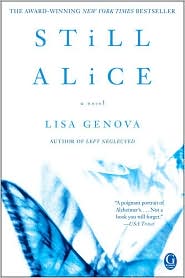 Lisa Genova's Still Alice is a novel you'll read with your heart.   And, it will break your heart, but Alice Howland's story is so tragic, and so realistic, that it needs to be read.   I'll thank the friend that recommended it to me.  And, you won't regret picking it up on my recommendation.  I promise.
As a speaker, Dr. Alice Howland was introduced as "The eminent William James Professor of Psychology at Harvard University.  Over the last twenty-five years, her distinguished career has produced many of the flagship touchstones in psycholinguistics."  However, Alice Howland, at only fifty, lost a word in that speech she presented.  She lost other things, but chalked it up to getting old and menopause.  But, her youngest daughter, Lydia, noticed she repeated questions.   Alice didn't panic though, until she couldn't find her way home from Harvard Square one day.  Alice's husband, John, a scientist himself, didn't notice Alice's problems.  But, Alice did, and she pushed her way into doctor appointments until she was diagnosed.  Alice had early-onset Alzheimer's.
Lisa Genova's story of a woman with Alzheimer's is unusual because it tells the story from Alice's viewpoint.  So many Alzheimer's stories deal with the elderly.  Instead, we see a brilliant young woman, at the top of her profession, with three grown children and a successful husband, realize that someday she was going to lose her sense of Alice.  And, in Alice's two-year journey, we watch her husband's denial, the uncertainty as to how to handle it, and the eventual loss of the Alice she thought she was.  "Who was she if she wasn't a Harvard psychology professor?"  Genova shows us a woman who knows what she's losing, and she recognizes it before her family does.
Lisa Genova holds a Ph.D. in neuroscience from Harvard University, and she combines her scientific background with an insight into the heart and mind of a woman who suffers from Alzheimer's.  It's important to know that the National Alzheimer's Association endorsed the book.
I can't praise this novel highly enough, and I won't give more details.  You should read this book to see Alzheimer's from the victim's point of view.  Still Alice is unique because Genova shows that Alice, as she becomes, still embodies someone beautiful.  She no longer knows her family, but she recognizes love.  And, she herself embodies the comment her mother once made about butterflies.  "Just because their lives were short didn't mean they were tragic."
Lisa Genova's website is http://www.lisagenova.com/
Still Alice by Lisa Genova.  Simon & Schuster, Pub. Date, 2009.  ISBN 9781439102817 (paperback), 320p.

Oh this sounds like I'll need to have a box of tissue handy. Alzheimer's is something we are just beginning to deal with in my family (my mother-in-law) and it is heartbreaking. I'll be sure to pick this up. Thanks for sharing.

Oh, I absolutely loved this book. I think it will go on this year's top 10 for me.

I really do want to read this book even though I know it will make me sob. My dad has some dementia (it's nothing compared to Alzheimer's) so I can just imagine what dealing with Alzheimer's would be like.

I've been fortunate, and haven't had to deal with it, but I can guess how terrible it must be. Genova does a wonderful job giving the patient's perspective, rather than the caregiver's. Despite the tissues, I think you might want to read it.

Lisa Genova also has a new one coming out in January. I can't say much about it now, since I reviewed it for Library Journal, and the review isn't out yet. But, I love her new one, and I think you might like it, too.

As I said, I've been very fortunate in not having to deal with it. But, this book is beautiful, even though it's tragic.

I agree with you Lesa- this is an important book that everyone should read because the point of view is so telling. I read and reviewed it last week and we've chosen it for our book discussion group in December. It will definitely be on my top 10 for the year, and I'm anxiously awaiting her new one. Thanks for another great review.

You're welcome, Tina. I heard from a librarian friend who also loved this book. She said she used it successfully with two book groups, so I hope you have a terrific discussion in December.

Didn't Lisa Genova handle the point of view beautifully? I cared so much more about Alice since I saw it from her point-of-view.

This is truly an important book. I think everyone who has any connection to a person diagnosed with Alzheimer's should pick it up and read it. From my experiences, it is very true to life and it shows the progression of this awful disease in a very clearcut manner.

Even if you don't have a connection to someone with Alzheimer's, read this book. Yes, it is sad, but there is a sweetness and sense of hope even at the end. Families can survive dealing with this tragedy. There can be silver linings on the very dark clouds.

Thanks for highlighting this book, Lesa.

Thank you, Kay, for sharing your viewpoint on the importance of this book. Because of your experiences, your opinion carries extra weight. Thank you, Kay.

My book club read and discussed this book and we adored it. Many of us have relatives or friends who suffer or died from Alzheimer's, so it hit close to home. I liked how Alice's family chose to deal with her disease in the end. I'm looking forward to Lisa Genova's next book.

It's a book that just seemed to have been overlooked in our library system, Beth. But, I'm going to discuss it at my two brown bag luncheons in November because it's such a beautiful, important book. And, I think you'll like her next book as well.

Loved Still Alice. I have an advance copy of her new book; guess I had better move it up to the top of my stack!

Do move Left Neglected up on your TBR pile, and let me know what you think, since I can't tell anyone until after the review is out.

This sounds like a very good book, but scary for all of us who lose and forget things as we get older and wonder what is happening.

My mother developed dementia four years ago. It was sudden and an instant crisis, requiring swift intervention.

Luckily, she has been in a very good assisted living since a few months after the crisis started.

She can't remember my nephew's or brother-in-law's name and complains, but she does have a life and friends. And, the facility is excellent. (They have so many activities that I feel exhausted reading their calendar for the coming months.)

Dementia is hard to deal with. Often, as in my mother's case, she was the last to know it--and I still think may not. And, one often has to deal with a lot of anger and fear on the person's part.

It's also very hard on the family which has to figure out what to do, and take care of everything, including the person's residence and their belongings and papers, while dealing with their anger and fears.

Luckily, I have a sister who found a good assisted living facility and knew what to do.

But it was a tough several months.

I would like to read this book, but don't know if I can, as it's a very difficult topic if one has dealt with it, but it sounds like the author did a wonderful job.

This was an amazing book. I was almost afraid to read it - Alzheimer's is such a devastating disease, and to have it start at such a young age for someone as brilliant as Alice, well, I just wasn't sure I could handle it. But I'm glad I overcame my initial misgivings, because it's a phenomenal book.

You might not be ready for Still Alice. Go back and read Kay's comments, though. She dealt with it with her mother as well, and she felt this book was important. But, don't push yourself to read it. It might be too soon.

Isn't it a beautiful, powerful book, Ingrid? Talk about stereotyping someone. I just don't think of a scientist such as Genova writing such beautiful fiction.

I've heard this is a really good book. So glad to see that you enjoyed it too. I plan to get it, at some point.

Having just read another book with a woman with early-onset Alzheimer's, I can say this is the better of the two. It's very good.