The Spider's Web by Margaret Coel 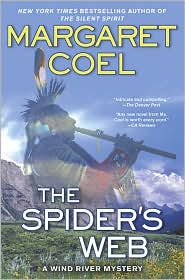 Once a year, I get to take an imaginary trip to the Wind River Reservation in Wyoming in Margaret Coel's superb mystery series.  The Spider's Web is the fifteenth book to feature Father John O'Malley and Vicky Holden.  If you haven't read the series, you could pick it up here, but the story is so much richer if you've followed the relationship between the priest at the mission, and the Arapaho attorney.  Father John has been at St. Francis Mission for ten years.  In that ten years, he and Vicky have seen their share of murders that tore the community apart.  The latest one threatens the community, and the relationship between Vicky and Father John.
The atmosphere of this latest book is unsettled from the beginning when Roseanne Birdwoman is on her way to a party with two Arapaho men, outsiders who only appeared on the reservation a year earlier.  When the rowdy men stop at Ned Windsong's house, she hopes he'll join them, because Roseanne and Ned used to see each other, and, at one time, planned a future together.  But the two men find Ned dead in his house, with the white woman who claims to be his girlfriend, dead or unconscious.  It isn't long before suspicion on the "moccasin telegraph" points to that white woman, Marcy Morrison.
While Father John agrees to allow Marcy to stay at the mission, he also realizes she's a troubled young woman.  But, Vicky sees her differently.  She takes her on as a client, seeing her own failings as a mother when she looks at Marcy.

Once again, Coel has stirred up the issues that arise in the Native American communities.  With this book, I found myself feeling sorry for the Elders.  They watch their young people leave the reservation, and return, troubled, and in trouble.  Along with Father John, they've seen too many of their young people murdered in recent years.  Ned Windsong is the latest victim, caught up in problems that returned with him to the Wind River Reservation.   And, those problems continue to spread.  The story started with an unsettled atmosphere, and, unlike previous novels in the series, The Spider's Web ends with a feeling of foreboding.   Let's hope the recent past doesn't come back to haunt Father John and Vicky.

I'm ashamed to say I've never read one of Margaret Coel's books and I don't know why. They sound like books I would enjoy; I need to give them a try VERY soon! Thanks, Lesa!

Oh, Kaye. There are so authors out there I haven't tried yet, and I know I'd like them. I've never read one of S.J. Rozan's books, and I think I'd like them. I understand her latest book is terrific. So, don't feel bad. But, you might enjoy them.

I haven't read Margaret Coel's books either, but I keep hearing wonderful things about them. Sounds like this one might tug at the heartstrings a little, too.

They all tug at the heartstrings a little, Elizabeth. And, now that Tony Hillerman is gone, I think Margaret Coel is the best writer out there for Native Americans in mysteries. The Arapaho in Wyoming have honored her for her books.

This is one series I really want to get into. I'm intrigued by the Native American aspect to it.

I've read every book in this series, and I've always learned something about the Native Americans, particularly the Arapaho. Fascinating books for the culture as well as the mystery.

Just finished the Spider's Web. I think I have read all of Coel's fiction. I think there is an error. On page 221 of the paperback it says there are two courts. One with women playing doubles and one with men's singles. The next page says that Gail is playing singles. I believe she is a woman. Not important to the story line, but not correct as I understand it. Linda