Side Jobs: Stories from the Dresden Files by Jim Butcher 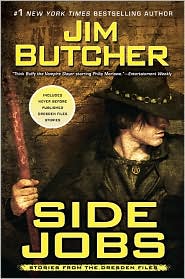 Is there any more appropriate book to discuss on Halloween than Jim Butcher's Side Jobs: Stories from the Dresden Files?  Harry Dresden, the only wizard listed in Chicago's yellow pages, bumps into more things that go bump in the night than any other character I've read about.  If it's weird and nasty in Chicago, Harry's dealt with it.
Butcher's latest book is a collection of stories about Dresden.  Most of the stories were written for one anthology or another, and Butcher explains why he wrote each story, and where they fall in the course of the actual novels.  For instance, "Something Borrowed" was written for an anthology called My Big Fat Supernatural Wedding, edited by P.N. Elrod.  It "Takes place between Dead Beat and Proven Guilty," focusing on the Alphas, Harry's werewolf friends.
As a fan of Harry Dresden, I love finding new stories about him.  But, it's also a pleasure to read the stories here because they feature so many of the friends we've grown to love in the course of the series.  "A Restoration of Faith" may seem a little weak since it was Butcher's first attempt at a Harry Dresden story, but it also shows the first meeting of Harry and Murphy.  Bob, Mouse, Michael and Molly all have major roles in one story or another.  Thomas even gets to tell his own story in "Backup."  And, for those of us who were shocked at the end of Changes, Murphy narrates an original story, "Aftermath," that takes place an hour or two after that novel ended.
I never thought the TV show ever did justice to Harry Dresden.  But, no matter what happens after Changes, Jim Butcher brings my favorite wizard back to life in these stories from the Dresden Files, Side Jobs.
Jim Butcher's website is http://www.jim-butcher.com/
Side Jobs: Stories from the Dresden Files by Jim Butcher.  Penguin Group (USA), ©2010. ISBN 9780451463654 (hardcover), 432p.