P.L. Gaus for Authors @ The Teague 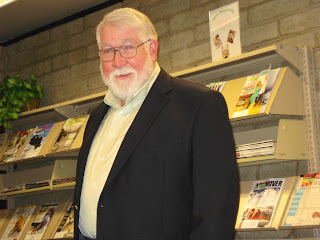 Paul L. Gaus has been studying the Amish culture in Holmes County, Ohio for thirty years, and he has thirty years of stories to tell.  It's too bad we only had forty minutes to hear the author of the Ohio Amish-Country mystery stories talk about his books. 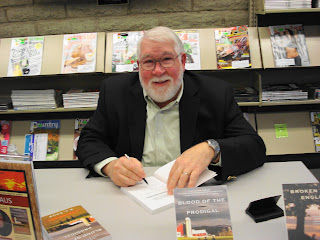 Fascinating! I didn't realize the Amish weren't allowed to read fiction, but it does make sense. That *was* a real compliment from the man. Thanks so much, Lesa, for this glimpse into Amish life via Mr. Gaus.

You're welcome, Elizabeth. I'm not sure all Amish are not allowed to read fiction, but at least that man's Bishop didn't allow his congregation to read it. Yes, that's exactly how Paul felt, that it was a real compliment. I found it fascinating as well. I've only read the first in the series so far, but he did an excellent job covering the Amish culture.

Great post and so informative. Mr. Gaus's books have been languishing on our shelves. I'm hoping to generate some interest by sharing your article.

I would like to try one of Mr. Gaus's books. They sound as fascinating as the man himself. Thank you for a great post!

Thank you, Carol. I hope to generate some interest as well. The first mystery was enjoyable, and informative.

My pleasure, Bev. Thanks for saying it was a great post!

Great post. I've started reading these books and it's great fun to have a peek behind the scenes.

Thank you, Clea. I enjoyed the first one, and I already have the second one to read. Now, I just need some more time!