The Killing Storm by Kathryn Casey 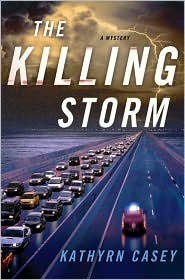 Texas Ranger Sarah Armstrong is always a conflicted woman.  On the one hand, she's a law enforcement officer with an important job, determined to investigate crimes, and save people when necessary.  On the other hand, she's a widow whose twelve-year-old daughter needs her mother.  In The Killing Storm, the third book in Kathryn Casey's Sarah Armstrong series, Sarah is going to have to make a choice as a hurricane bears down on Houston.
How did Armstrong and her partner, Sergeant George "Buckshot" Fields end up in a field investigating the death of a champion bull, shot and left with some sort of design on his hide?  It isn't the normal case for the Texas Rangers, but there's a great deal of money involved.  The case leaves Sarah a little uneasy, but it doesn't command her attention as the story of a missing four-year-old boy does.  FBI agent, David Garrity, is working the case of Joey Wagner, a little boy who disappeared while his mother talked on the phone.  Garrity and Armstrong both find the mother's behavior odd.  But, their primary concern is finding the missing child.  And, they don't have much time.
As Hurricane Juanita bears down on Houston, Sarah would like to forget about the bulls who have been killed and marked, and concentrate on finding Joey.   Then, a greater tragedy occurs, and the investigative team realizes the two cases have converged just as the storm is preparing to hit.   And, once again Sarah Armstrong has to make choices.
I'm a big fan of Kathryn Casey's Sarah Armstrong books.  She presents a modern woman with an important job, conflicted because of her role as a mother.  Both of those roles are important in this series, and I respect the author for showing that.  At the same time, Armstrong's cases are always interesting.  And, this time, Sarah faced both of her roles in the face of The Killing Storm.
Kathryn Casey's website is http://www.kathryncasey.com/
The Killing Storm by Kathryn Casey.  St. Martin's Minotaur, ©2010. ISBN 9780312379520 (hardcover), 320p.

*****
FTC Full Disclosure - I requested an ARC from the publisher, since I have an interview scheduled with the author.

I'm hoping to get this author's works on my mystery book group's schedule for next year. I think we'd enjoy reading about a woman Texas Ranger since we live here in the home of the Rangers of all kinds. LOL

Glad to hear this one is a winner.

I hope you succeed, Kay. There would be a great deal of discussion about women Texas Rangers, why there are so few, Sarah's dual roles, etc. I think Casey's books would work for your group.

Welcome, Suko. I hope you find enough material to keep you coming back. Tomorrow, I'll be reviewing Casey Mayes' A Deadly Row.