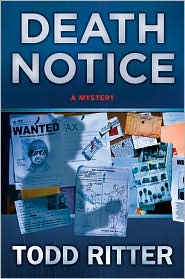 Sunday Salon provides the perfect opportunity to introduce debut authors.  And, I can think of some journalists who have successfully written crime fiction.  Michael Connelly, Brad Parks, and Hank Phillippi Ryan are names that immediately come to mind.  I know there are dozens of others.  Now, Todd Ritter has the opportunity to join their ranks with his mystery, Death Notice.
There had never been a murder in the quaint town of Perry Hollow, Pennsylvania.  Police chief Kat Campbell knew the history of the mill town, since her grandparents met at the lumber mill, and her father was once the police chief.  And, she recognized most of the residents of the small town.  So, Kat was as shocked as everyone else when a trucker found a coffin at the edge of town, with a local farmer in it.  The murder was horrible enough to call in the sheriff, who turned it over to the Pennsylvania Bureau of Criminal Investigation.  As head of the task force, Nick Donnelly suspected the death was at the hands of a serial killer dubbed "The Betsy Ross Killer," due to his skill in using a needle and thread on his victims.  But, even Nick wasn't prepared when Henry Goll walked in the door, with a warning.  Goll wrote the obituaries for the local newspaper, but he had never received a fax that predicted a death before.
Donnelly's task force was expected to handle the investigation.  However, Chief Campbell became a partner in the case when she insisted on protecting her town.  She pointed out she knew the citizens.  But, she couldn't protect everyone from a killer determined to spread terror.  And, she and Donnelly reluctantly accepted Goll as part of their case when the killer seemed to target him to receive messages.

Ritter avoids rookie mistakes in this compelling mystery.  Kat, Donnelly, and Goll are all fascinating characters with weaknesses that make them all the more interesting.  Kat, with a special needs child, is particularly aware of her complex role as a single mother and a police chief.  And, each time I thought I knew where the case was going, the author threw in a twist.  Those twists made perfect sense at the end of this successful debut.
Since I often review cozy mysteries, I feel compelled to say some of the details in this book can be grisly.  But, it's a well-written crime novel, riveting enough that I read it in one sitting.  So, I'll put you on notice.  Todd Ritter's Death Notice will be joining the ranks of other successful first novels by journalists turned mystery writer.
If you're a fan of authors' websites, as I am, check out Todd Ritter's at http://www.toddritteronline.com/.
Death Notice by Todd Ritter.  St. Martin's Minotaur, ©2010. ISBN 9780312622800 (hardcover), 336p.

He had me at 'blood-soaked'. That is a pretty snazzy website!

Sounds like an intriguing plot and some characters one could come to want more of. Thanks for this introduction.

Oh, very good, Charmaine. It is a terrific website, isn't it? And, the book is very, very good.

Just added this to my request list at the library. Since I live in a small town in PA this book should seem very familiar.

Also I wanted to thank you for the link to FictFact. What a find! Now I am so organized and somewhat amazed at the number of series I like to keep up with.

I'm so glad you requested Death Notice at your local library. You're right. The book should feel familiar. Come back and tell us what you thought later.

Isn't FictFact terrific? And, I love to get the weekly notices about my books coming coming out.

In addition to being a successful debut-er, Todd is an approachable and friendly one! I would encourage anyone with questions about this or future work to write via his website...don't all authors (new ones especially) love getting letters like that?

Anyway, Lesa, thanks for posting the review--has whet my appetite even more for this one!

Hopefully, Jenny, you'll be able to put your hands on it soon. I picked my copy up at the library.

You're right. I'm sure new authors do like getting questions about their work.

Lesa, thank you for the wonderful review of DEATH NOTICE and the kind words about my website. And Jenny is correct -- I LOVE getting e-mail from readers. So feel free to say hi.

As for a series, my second book will, in fact, have some of the same characters as DEATH NOTICE, but the circumstances will be far, far different. You won't need to read one in order to understand the other. They can pretty much stand on their own.

Thanks again and happy reading!

Hey, Todd, your getting around. I just read an interview on you by you over at http://nigelpbird.blogspot.com

I'll be interested to see how you handle the characters in the next book. Thanks for letting us know there will be some of the same characters.

Thanks for the link to Todd's interview. I'll have to check it out.