Blood of the Prodigal by P.L. Gaus 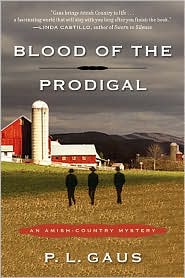 P.L. Gaus' first book in the Ohio Amish-Country mystery series came out in 1999, but Blood of the Prodigal has been reissued.  I'm so glad it has been, or I might not have found this series of six books set in Amish Country in Ohio.  Gaus combines an intriguing mystery, an interesting trio of sleuths, and the Amish culture in a story that gets my "family recommendation."  That means, I liked it so much, I called my sister, and told her to read the book.
It takes a great deal for a Bishop of the Old Order Amish in Holmes County, Ohio, to leave his community, and seek out an outsider, someone "English," for assistance.  But, the disappearance of Bishop Eli Miller's grandson counts as a big deal.  He turns to a trusted minister, Pastor Caleb Troyer, but, with Troyer about to leave the country, he's going to need assistance from a boyhood friend, Professor Michael Branden.  But Bishop Miller isn't telling them everything, just, that they can't talk to the police, and they only have a short time to find Jeremiah, whose father probably took him.
Four days later, Branden doesn't know much.  "A young dreamer of a student put too tight a roll on his trouser cuffs and ended up a smoking, drinking, fast-living scoundrel who deserted his pregnant girlfriend, drove her to suicide, kidnapped his own son ten years later, and is being hunted by his father who shunned him, and by the girl's brother, who has vowed to kill him."  It seems life in Amish Country isn't quite as peaceful as we all imagine.
Branden and his wife work slowly to develop sources in the Amish community, but it isn't fast enough.  When the boy's disappearance leads to murder, the local sheriff is suddenly involved.  And, Branden's other boyhood friend, Sheriff Bruce Robertson, can't be taken lightly.  He may be manic-depressive, with mood swings when he's not on his meds, but he's a shrewd judge of character who has worked with the Old Order Amish for a number of years.  Now, can the friends put their knowledge together in time to save another life?
According to Gaus' website, his "extensive knowledge of the culture and lifestyle of the Ohio Amish comes from over thirty years of travel throughout Holmes and surrounding counties in Ohio, where the world’s largest Amish and Mennonite population sprawls out over the countryside near Millersburg, Wooster, and Sugarcreek. "  He brings that knowledge to this mystery, one that emphasizes the Old Amish culture and lifestyle.  At the same time, Blood of the Prodigal is a strong mystery, with interesting twists.  Blood of the Prodigal is a solid debut mystery, set in an interesting culture in our own country.  Broken English is the second book in the series.  I can't wait to read it.
P.L. Gaus' website is http://www.plgaus.com/
Blood of the Prodigal by P.L. Gaus.  Penguin Group, (USA), reissued 2010.  ISBN 9780452296466 (paperback), 256p.
*****
FTC Full Disclosure - Library book.
(And, a personal note.  I'm hosting P.L. Gaus for Authors @ The Teague on Wednesday.  I lived in Ohio for twenty-eight years, and I know so many of the locations in this book.  If you live in northern Ohio, and like mysteries, you might want to try this book.)

Wonderful! I love books set among the Amish--probably because my own life seems so complicated that something simpler is a delight! Of course, this is a mystery too, so life is not normal for the characters at the time of the book. Sounds like a great series.

I really liked this first book in the series, Elizabeth, and I'm looking forward to picking up the second one, and hearing Professor Gaus on Wednesday.

I'll admit to a fascination with the Amish lifestyle - I so admire their strength, faith and courage - and imagine I would love this book too.

I think you'd appreciate the care that Gaus uses in discussing their faith and culture.