Ann Littlewood for Authors @ The Teague 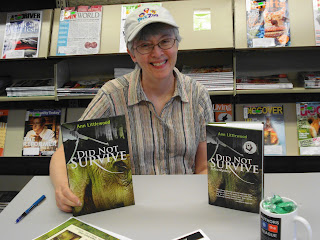 It's always a pleasure to welcome an author I've never met before when they appear for Authors @ The Teague.  I hadn't met Ann Littlewood, but her zoo mysteries are insightful glimpses behind the scenes.  Everyone in the audience was looking forward to hearing from the author, who had worked for the Oregon Zoo for twelve years.  Littlewood told us she had been a zookeeper there, and then did technical writing for twenty years.  Once she retired, she had the chance to go back to the zoo, through her writing. 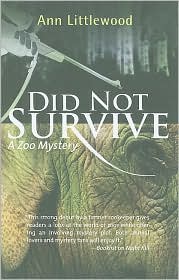 In Night Kill, Littlewood introduced her zookeeper main character.  Iris Oakley abruptly became a widow in that book, and the story is about her attempt to find out how her husband died.  Now, in the second book, Did Not Survive, Iris is six months along in her pregnancy, trying to get a grasp on her future life as a s single mother.
As the book opens, Iris had been working the late shift, volunteering.  The book is set at the Finley Memorial Zoo in Vancouver, Washington, across the river from Portland.  The zoo isn't real because, having her own zoo, Littlewood said more could go on in a mystery, and, she could add any animals she wanted.
Anyways, it's early morning, and Iris is on her way to punch in to do her real job, working with birds, when she hears a ruckus at the elephant barn.  She never worked with elephants, but she could certainly check on them.  When she arrived there, she found a body in the front stall with an angry elephant.  The man is still alive, so Iris needs to get the elephant away from him.  While working to move the elephant, she quickly realizes the man on the ground is her boss.   That leads to a number of questions.  What was he doing there so early in the morning?  Why was he in there alone with an elephant?  And, why did the old elephant attack?
Ann told us she didn't work with the elephants at the zoo, but she had been pregnant twice while working there.  That's why she knew Iris would need to wear a man's coveralls, the only thing big enough to fit.  Littlewood said she worked as a nursery keeper, so she did have the chance to work with an elephant calf who was sick.  She did have the chance to see an elephant upset.  The elephant had lost her baby, and she was pacing, upset, when the zoo director went too close, and she slapped at him.  Had he been hit, they would have been looking for a new director.  So, Littlewood saw both sides of elephants.  They do have a capacity for violence, and they do kill people when they're in the wild in India.
Littlewood had to do a great deal of research since she hadn't worked directly with elephants.  She did all the web stuff, then talked to elephant managers at zoos.  They're kind of gun-shy because they've been beat up by animal activists.  But, Littlewood doesn't do a whitewash.  She said some zoos are getting better at managing elephants.
Ann also took advantage of the opportunity to attend a conference of the American Association of Zookeepers in Seattle.  She said, just as there's a pod of whales, a group of zookeepers are called, "A poverty of zookeepers."   So, signs are posted, and that's how zookeepers pick up roommates.  So, she signed up to room with Debbie and a zookeeper from India named Varma.  So, Ann and Debbie arrived at their room, with two double beds and a trundle, and spent the evening getting to know each other, talking.  They received a message that Varma was held up at customs and would be late.  Very late that night, there was a knock at the door, and a man stood there, saying "I'm Varma.  Is this my room."  They said yes, pointed him to his trundle bed, and he flopped on it.  The next day, they checked to make sure he was still breathing before leaving for the conference.  When they did get to know him, they learned he was a field biologist researching Asisan elephants in India.  On behalf of the government, he devised a checklist to evaluate elephant welfare.  Littlewood felt fortunate to get to grill him about elephant behavior.  She said the research for Did Not Survive was fun.
So, Littlewood gives us elephant behavior, and then, for a mystery, she hopes she provides a good puzzle that isn't too obvious.  So far, the mystery and zoo people have liked the book. 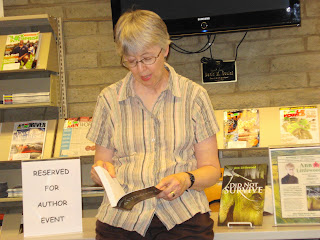 Before reading from the first chapter of Did Not Survive, Ann mentioned she loved the cover of the book.  She said Patrick Turner did the cover.  He does a number of covers for Poisoned Pen Press, and won an award for the cover of Night Kill.  Then, she did a short reading.
Afterward, she said she's sharing the world of the zoo with readers.  That's what she likes about mysteries, the opportunity to explore a new world, whether it's a zoo, a bookstore, or a cheeseshop.
Asked if she writes everyday, she told us she hates that question.  She doesn't do what everyone says.  She just can't get up at 4 in the morning, and write first thing every day.  She told her sister-in-law that, a woman who is a true artist.  And, she went on a wonderful tirade.  She said that's what men do, getting up and working first thing, and working straight through, because they have wives.  But, women have kids, errands and appointments.  They work in bursts.  And, that's how Littlewood works, in bursts.  And, then an author has to go promote.  You have to go to conventions such as Bouchercon, write guest blogs, write your own blog.  Then, you don't have much time to write.
When asked if there would be a book every year, Ann said more like every other year.  It took her five years to write Night Kill, then nine months for Did Not Survive.  She told us she didn't think she could do better than nine months.
She told us she thinks she has picked her animals for the next book, parrots and snakes.  The reptile people have been asking her to do snakes, saying they need the PR.   But, everybody loves parrots, since they're so beautiful.   Littlewood said she tries to bring real world issues to her books.  Parrots and reptiles are both victims of smuggling.
Littlewood said she's been a lifelong conservationist, and the royalties for Did Not Survive go to conservation.
When she was reminded that one question was about zoo politics, Ann said there's always tension in zoos.  They need corporate donors, money, and people through the gates.  They need to expand the animal space.  The bar keeps rising for zoos.  Animals are expensive.  The food budget is enormous.  Animal people don't care about the money issues; they just want their own exhibit to be great.  They want the best of everything for their animals.  Some of the tension comes from conflicts.  Why spend money on a shiny new cafe when the zebra has crappy fields?
Zoos have gotten better.  Accredited zoos are required to have strong educational components.  And, they have to have strong research programs.  Zoo research is fun for the animals.  When the zookeepers need them to do something, they give them treats.   When they want to get blood, or have them open their mouths to check teeth, they get treats.  It's wonderful training.
But, the wild has not gotten better.  Think of Africa has the wild, wild west.  The prairie grass is gone, plowed under.  That's happening in Africa and Asia.  It may have been true at one time that humans and animals could live together, but it's no longer true as humans take over animal land.  We need to protect the animals.
Zoos have species survival plans.  Their breeding programs may save endangered species, and build self-sustaining populations.  They also support institute conservation, trying to look after habitats.  For instance, in order to keep rhinos alive, they need to keep poachers at bay.
Ann Littlewood ended by saying if anyone was interested in supporting conservation organizations, there are links on her website, http://www.annlittlewood.com/.

Phoenix is a lucky city for mystery fans thanks to Lesa and "The Teague". I had a wonderful experience there! Thanks, Lesa!

Thank you, Ann! What a nice compliment. I try to make the experience good for the author so they enjoy it as much as I do.

Wonderful post--a review of so much more than a book!

Thank you, Marian. I do try to do a good summary for those who can't make it to the program.