To Fetch a Thief by Spencer Quinn 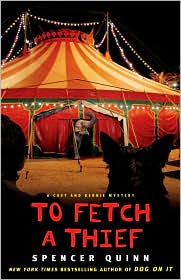 I just love Chet.  If you can accept a dog as narrator of a mystery, and partner in a detective business, you'll want to check out Spencer Quinn's latest Chet and Bernie book, To Fetch a Thief.

Bernie Little owns Little Detective Agency.  His ex-wife might own part of the business, but his business partner is actually his dog, Chet.  And, the humor in the book comes from Chet's dog-like behavior.  Everyone who likes this series says the same thing, "He's such a dog!"  He might be working a case with Bernie, but he's easily distracted by Slim Jims or short ribs.  Actually, Chet is distracted by female dogs, his own barking, and any kind of food.  But, he's still the perfect partner for Bernie.


When one of Bernie's clients gives him tickets to the circus, he takes his son, Charlie, only to arrive the day after the elephant and her handler disappeared.  Although the circus owner tries to convince Bernie the handler kidnapped her, Charlie wants his father to look for Peanut, the elephant.  And, Popo, the clown wants Bernie and Chet to look for him.  Although the local police are convinced the handler ran off, Bernie is a little suspicious of the guard at the gate.  And, when a witness changes his story, Bernie knows he's on to something.

As I said, I love Chet.  But, this third book in the series fell a little flat to me.  It seemed drawn out, and lacked some of the spark.  Perhaps it was the lengthy search for the elephant, leading to Mexico.  I'm a big fan of Chet and Bernie. To Fetch a Thief just didn't fetch my fancy.

You can visit Chet online at www.ChetTheDog.com

*****
FTC Fulll Disclosure - The publisher sent me the book, in hopes I would review it.
Posted by Lesa at 3:00 AM

Chet and the setting sound like fun...but it sounds like this isn't the best of the series.

I still need to get the second one in the series! I may wait to get this one till paperback. :)
Krista

I liked the first book too. I had heard that this one gets somewhat tiresome. But your review led me to go to the web site and order a sample of the digital copy of the second book (which I didn't even know existed). I will try that one.

I loved the first book, and the second was just as good because you actually learned more about Bernie, as seen through Chet's eyes. Doesn't hurt to try them!

The second book was a treat. As I told Elizabeth, I liked it since you learned more about Bernie.

Oh, good, Joe. Let me know what you think after you read the second one.

I need to check out this series, because I love animal narrators. Yeah, I'm a geek.

That's OK, Kathy. Count me as a geek as well. Chet is one of the best animal narrators I've read.

Oh bummer. You know I love Chet, too, Lesa. Makes me sad this one didn't live up to the first two. I didn't get an advance of this one, so maybe I'll wait and get the audio from the library.

Now, remember, Jen, that's just my opinion. Although, Joe did say he'd heard the same thing. You might like it more than I did. I still love Chet, though!

Must read, thanks! for sharing.

So glad to hear there's a third book in the series -- can't wait to get it. It's really not hard to accept Chet as the narrator as Spencer Quinn nails the tone and style, so I think anyone who likes dogs will like this series.

I agree, Karen. Isn't Chet wonderful? Dog lovers should like this series.