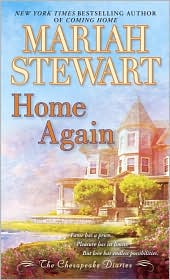 AND spent 5 weeks on USAToday and 9 weeks on Bookscan's Romance list!"  And, if Home Again is any example, deservedly so.  I don't read a large number of romances during the year, but this one was wonderful.  If you're willing to try romances, I hope you try Home Again.
Dallas MacGregor was one of the biggest stars in Hollywood.  But, she considered herself a mother first and an actress second.  When her six-year-old son, Cody, came home from camp  in tears because the other kids knew his sleazy father was on sex tapes with two women, Dallas, who had already filed for divorce, knew it was time to find a refuge.  And, what better place than St. Dennis, a small town on the Chesapeake Bay in Maryland?  The town had been Dallas' own refuge when her father died suddenly when she was eleven.  And, her great aunt, Beryl (Berry) Eberle, retired as an actress herself, took Dallas in then, and is willing to welcome Dallas and her son home now.
Now, back in her summer home, can Dallas rebuild a secure life for her son?  And, what about Grant Wyler, her summer love from the time she was eleven?  The boy that she left when she went for her dream as an actress, is back in St. Dennis with a practice as a veterinarian.  And, Berry is quite skillful at finding a way to bring together a boy and a dog, and a woman with her ex-boyfriend.
This is a romance with strong, interesting characters, and left over stories that will make you eager to read the next book in the series.  The minor characters have their own backstories to be told.  Beryl's story is revealed in this one, but there are other interesting characters, beginning with Grant's sister, Steffie, who runs the local ice cream store.  And, what's the secret behind Dallas' brother?  There are more stories to be told.
In the meantime, Mariah Stewart's Home Again offers warmth, romance, dogs, and a beautiful setting.  Is there anything else you expect from a romantic novel?

*****
The publisher is offering a copy of Home Again to one winner from each blog on Mariah Stewart's blog tour.  If you'd like to enter to win, just comment below, and include your email address.  Thursday night, after 6 p.m., I'll contact the winner to get the address where you want the book sent.  If you win, you could also give the address of a friend, if you'd like to surprise them with the book.  Good luck!  You have just two days to enter.
Mariah Stewart's website is http://www.mariahstewart.com/,  and she can be found on Facebook at http://www.facebook.com/pages/Mariah-Stewart/106000742764985?v=desc
Home Again by Mariah Stewart.  Ballantine Books, ©2010. ISBN 9780345520357 (paperback), 464p.

*****
FTC Full Disclosure - As part of the TLC Tour, the publicist sent me a copy of Home Again, so I could read and review it.

I haven't picked up a good romance novel (except for the Brides quartet by Roberts)in a couple of years. This one sounds like a winner!
stclairck@gmail.com

I liked this one, Caryn. It's one of the books I'll be passing on to my mother, which is always a sign that I enjoyed it. (smile) If it's good enough for Mom...

I really liked this one, and I'm looking forward to reading the earlier one, and the next in the series.

Romance is a genre where I don't read alot. THis one looks like it definitely might hold my interest. Please enter me.

I enjoy reading Mariah Stewart’s books. Thanks for featuring this one. (Email in profile.)

I just recently discovered Mariah Stewart and am quite taken by her Chesapeake series. I've read the first one and am halfway through the second book. One sign that I'm enjoying a new author, is that I start to look at their backlist. I believe that I'll be buying more of her books.

I'm so glad to see you feature a romance as I love them just as much as mysteries.

Thanks for featuring this lovely book. I love romance which transports me to other places and eras. Sounds wonderful.

I had picked this up at the bookstore and put it back down again, but after reading your review, I think I'll get it- it sounds like I would really enjoy this series.

I know that this book would be memorable and special. thanks.

You're welcome, everyone! I went to a meeting, lunch, and came back to find all these replies. Good luck in the contest. As you can see, I liked this one, or I wouldn't be sending it to my Mom.

This series is definitely going on my TBR list!

I hope you come back and tell me what you thought after you get a chance to read it.

I'm definitely up for reading a romance you recommend..since it doesn't happen very often. I like a good romance here and there too.