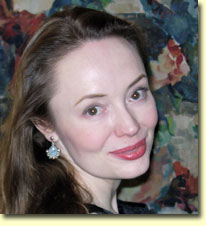 There's been a lot of talk in the mystery world the last couple months about Hilary Davidson's debut as a crime novelist.  I'm reading her book right now, The Damage Done.  I'm so pleased that Hilary was willing to take time to introduce herself and her book.  Thank you, Hilary.
I’m grateful to Lesa for giving me the opportunity to introduce myself to you. My name is Hilary Davidson and I am a crime writer. Making that admission makes me sound like I’m addressing a support group. In a way, I am, because since I started to explore the mystery reading and writing community, I’ve discovered a tightly knit group of people who are still, somehow, incredibly welcoming to newcomers. 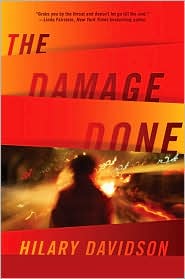 My debut novel, THE DAMAGE DONE, is being published this week by Forge. I’m both thrilled about that fact, and still slightly in disbelief about it. The book is about a travel writer named Lily Moore who is called home to New York when she’s told that her sister, Claudia, has died under suspicious circumstances. But Lily quickly discovers that the dead body belongs to a woman who had stolen Claudia’s identity, and that her sister is missing. When a neighbor reports having seen the real Claudia in the building the day her imposter died, the police begin to hunt for her as a suspect. In spite of the fact that Claudia is a drug addict and something of a con artist, Lily is certain that her sister isn’t capable of murder, and she becomes determined to find Claudia.
One of the questions that people have been asking about the book is what my sister thinks of it. The truth is that I don’t have a sister, though I do have two brothers who I used to think about trading in for a sister. One thing that I do have in common with Lily is that we share a day job — we’re both travel writers. Lily’s life is far more glamorous than mine: she lives in Spain and travels around the world constantly, writing about exotic places. I know travel writers who do that, but I’ve never been one of them. Oh, I’ve taken some truly incredible trips to places such as Peru, Easter Island, and Turkey, but most of my travel writing has been about my hometown, Toronto, and my adopted home, New York, which I moved to in 2001.

While THE DAMAGE DONE is my first novel, it’s not my first foray into fiction. I’ve been writing short stories for several years. Getting them published seemed like an agonizingly slow process, but it was incredibly valuable in terms of both playing with voice and style and narrative, and in terms of getting to know the mystery community.

Ironically, I didn’t know for a long time that there was such a community. Over the past couple of years, groups such as Sisters in Crime, MWA, and ITW — and social-networking sites like Twitter and Facebook — have connected me with mystery authors and readers, many of whom have become friends, even though we haven’t met in person. This spring, I realized how much I’ve come to count on them. A doctor removed a mole from my arm, and the biopsy found melanoma cells. Sharing that with friends all over the country — some on other continents — seemed strange, but the messages of support I got back helped me through an anxious time. After I had some minor surgery to see how far the cells had spread — the answer was, luckily, not far — some of my crime-writing friends created a flash-fiction challenge called “How Hilary Really Got That Scar.” The results — which portrayed me as everything from a serial killer to a hired gun — are some of the best get-well gifts I’ve ever received.

I’m going to be traveling extensively this fall to promote THE DAMAGE DONE. As I go from city to city, and to my first Bouchercon, I’m looking forward to meeting this amazing crime community that I’ve gotten to know online. That includes Lesa herself, whom I’ll be seeing when I visit Scottsdale. In the meantime, please come visit me at my website, my crime blog, or at my gluten-free travel blog.

Hilary is a splendid writer and always a pleasure to read. Now, what I heard about that scar was ...

Well, darn, Paul. I thought maybe we'd get to hear all the rumors here.

Thanks so much for having me over to guest blog today, Lesa! If anyone wants to see how those—ahem—rumors got started, I have a list with links in this post:

Chicago writer Dan O'Shea started the challenge, and others jumped in: Steve Weddle, Chris F. Holm, Eric Beetner, Naomi Johnson, AJ Hayes, Chris La Tray, Doug Telling, Ellen Neuborne... Ellen is a friend I've known for years, but the others are crime-community friends I only know online. I'm looking forward to meeting many of them this fall!

Just realized that I should have mentioned my Poisoned Pen event is on Tuesday, November 2nd, at 7pm. I'm honored that THE DAMAGE DONE is a First Mystery Club selection!

So maybe I'll meet Lesa there before my Authors @ The Teague event on Nov. 3rd... but either way, I'm really looking forward to it. Thanks again for having me guest blog today, Lesa!

You're welcome, Hilary. And, thanks for the link to the flash fiction, as well as the announcement of the Poisoned Pen event. Actually, you should see me there. I was just thinking our event was first.

As I said, good luck with The Damage Done.

It's wonderful to meet another writer and add to my ever-growing pile of "Must Reads." Congrats on the publication.

Thanks for the note, KK. I think Hilary might be checking back in later today.

Yep - add one more to my growing list of "must reads" also! Thank you, Lesa and Hilary!

If Hilary comes back today - please tell me what shade of lipstick you're wearing in this picture; i love it.

I'm sure your list is as long as mine, Kaye.

Oh, I love that about the lipstick. Since I swiped that picture off of Google images, let's hope Hilary remembers what color of lipstick she wore!

Congratulations to Hilary on her release! I'm looking forward to reading "The Damage Done." And isn't the online community of writers wonderful? So supportive.

I think it's a wonderful community, Elizabeth. I know how I heard from so many people when Jim died. And, it sounds as if they rallied around Hilary.

Thanks so much for your wonderful comments!

Paul, many thanks for dropping in and for your kind praise. You are always so supportive of my work.

KK, I'm very grateful to go into your "Must Reads" pile. I've discovered terrific writers through Lesa, so it's lovely to have someone discover me through her!

Elizabeth, thank you for your good wishes. You're right about online community of writers — there's something truly special about it. As Lesa mentions, there are great examples of that community rallying around people. It meant a great deal to me.

Kaye, your question made me smile! I'm a creature of habit, so I'm pretty sure that I'm wearing a MAC lipstick called "Retro" in that photo. I wear it often, and I can tell you that it looks great on everyone.

Lesa, thanks again for having me visit today. This is a fun place to hang out!