Cleo: The Cat Who Mended a Family by Helen Brown 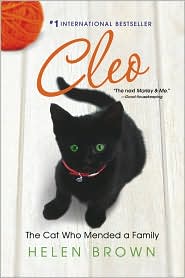 The Herald Sun summarized this book the best with the quote, "From the start, this is an emotional journey for author and reader."  If you're not prepared to cry over Helen Brown's international bestseller, Cleo: The Cat Who Mended a Family, don't pick it up.  However, if you want a story of love, survival, and life, and you love cats, you'll have to read this book.  Some blurbs have compared this to Marley & Me.  If the love of an animal can be compared, then that's fine.  Marley & Me, and Dewey are both special books about unique animals.  But, this book is unique in the tragedy and change covered in one story.
Helen Brown lived in New Zealand with her husband and two sons, Sam and Rob.  She was a columnist for a local paper, and her husband, Steve, was a radio officer on a ferry, away from home for a week at a time.  Although they were drifting apart, they both loved their sons.  So, when Sam and Rob picked out a kitten, too young to bring home, and Sam named her Cleo, Helen and Steve agreed to take her in a few months, although they weren't "cat people."
Helen describes the day that changed their lives.  She says days are so similar, they just become routine.  "The twenty-first of January 1983 started out that way.  There were no hints this date would slam down on us and slice our lives permanently in two."  There's no way to review this book and not say that Sam died tragically at the age of nine.  While Helen raged and cried, Steve shut down.  And, Rob, at six, had witnessed his brother's death.

This was a family in trouble.  So, when the owner of Cleo showed up to turn her over, Helen wanted to refuse the kitten.  But, Rob immediately claimed "Sam's kitten."  And, how can a mother who lost one son refuse the other?  Rob had been sleeping in his parents' room since his brother's death.  Now, with a kitten to care for, he wanted to return to his room, offering to share his room with the kitten, so she wouldn't miss "her brothers and sisters."  Even so, when the new kitten tore the house apart, and caused havoc, Helen was ready to return her, until one day she realized that she and Rob had laughed at Cleo, laughed for the first time since Sam's death.

As anyone who owns a cat knows, they're always entertaining, with unique personalities.  And Cleo seemed to have a special gift of communicating with Rob.  And, as Cleo grew, she brought new people into their lives, from special neighbors to friends for Rob, to people that would change the family entirely.  Cleo would never take the place of Sam, and there is no recovering from such a loss, but Cleo showed Helen and her family how to go on with life.  Rob said of Cleo, "She said she comes from a long line of cat healers."

There is no doubt this book will make you cry.  The author acknowledges that her life was changed forever by her son's death.  But, this cat, who appeared when the family needed her, seemed to step in so many times to move them into another stage.  When Helen considered suicide, there was the kitten, blocking her way.  Cleo welcomed new family members, and approved of new additions.  When Rob was ill, she was the healer.  There was always a special connection between Rob, the boy who witnessed his brother's death, and the cat who came to stay.

Helen Brown's broken heart will never heal.  But, her story of Cleo and her family says a family, and a heart, can be mended.  This book is beautiful in the story of a cat, and a family.  And, there's beauty in Brown's recognition, "Great joy doesn't obliterate grief.  Both can be encompassed at the same time."  Cleo: The Cat Who Mended a Family, was the cat who enabled her to realize the joy in life, despite the grief.
Cleo: The Cat Who Mended a Family by Helen Brown.  Kensington Publishing, ©2010. ISBN 9780806533032 (paperback), 272p.
*****
FTC Full Disclosure - The publicist sent me an ARC so I could participate in a blog tour for this book.
Posted by Lesa at 4:00 AM

I'm sure that story would make me cry. I love cats, but I'm allergic to them, so we don't have one. I want to hug that kitten on the cover of the book, though.

It will make you cry, but it's also a wonderful story, Kathy.

Best way to hug a kitten, if you're allergic!

Such a tragedy that inspired the book--I'm sure the writing helped Helen heal. I hear great things about the book.

I'm glad you enjoyed it, Lesa. When I was asked to read it and write a blurb, I opened it up and thought: "Oh, I can't possibly read this, it's to painful." But I'm so glad I pushed forward. It's a wonderful book and your review summed it up perfectly!

It was a tragedy, Elizabeth. My brother died when he was 2 1/2, and my father always said, you expect to bury your parents. You never expect to bury a child. When he told me that, it was years later, at his mother's grave. So, I know how much he still hurt from that.

It's a beautiful book.

Sounds like a beautiful book for cat lovers and non-cat lovers alike.

I was prepared for a tragedy, Beth, after reading the back flap. It's worth continuing to read, isn't it? Just a wonderful story of a family coming back together. Thank you! It's great to hear that you think that was a good summary.

I love all animal stories and this one will be no different. They are special critters who come into our lives, catch hold of our hearts and provide years, although it is never enough, of delight and comfort. Thanks for this review. I cannot wait to read it.
Love & Hugs,
Pam

It is a beautiful book, even for non-cat-lovers. For them, it's a story of a family. Very special book.

You're going to love this book because your attitude about animals being so special is a perfect attitude for reading this. I hope you get a copy soon.

I read this one recently too. What a story! I laughed, I cried, I shook my head in agreemnt. I'm not a big non-fiction reader, but I was glad that this one appeared in my TBR pile.

I'm not surprised that you liked it, Lesa!

Great story, wasn't it, Kay? I don't see how anyone is going to be able to get through it without crying.

Like you, glad it ended up on my TBR pile.

I'm crying already just from reading your review of this book.

I don't know if I can read it. I'd like to think I can, but it's just so incredibly sad.

Cleo to the rescue! That part is wonderful. Animals are so powerful that they can help with healing. This cat is amazing.

If only all people going through such tragedy could have cats like Cleo or dogs like Marley.

All I know, kathy, is that after Jim died, I told people I had my work during the day, and the cats waiting for me at home. And, I had a reason to "need" to go home, they were waiting to be fed, boxes cleaned, and they were there to cuddle. Some of them waited for me at the door. They weren't Cleo, but they did help me heal.

It is a sad book, but it's also the story of people who found a way to go on, past their grief.

I pretty much sobbed my way through this one - but in a good way. I agree, Lesa, comparing this book to Marley and Me and Dewey doesn't do it justice. The sensitivity with which Helen Brown shares her journey, and the wonder of how Cleo truly was the catalyst to helping this family heal put this one in my list of alltime favorite cat books, right up there with The Cat Who Came for Christmas, and A Snowflake in My Hand.

You're right, Ingrid. And, how do you explain to people that this book is worth sobbing over? It's just a wonderful book. I'm keeping my copy, and I ordered a copy for the library.

Thank you. I liked Marley and Dewey, but neither of them can compare, in my book. Helen Brown's needs were so much greater. And, her son, Rob, was just a miracle in himself.

He brought her so much joy when she needed it.

I'm not giving anything away by telling you the first time Helen Brown realized that life might go on was when she realized she and her son had laughed at something Cleo did, and knew it was the first time they'd laughed since the other boy died. They needed Cleo in their lives.

If you can bring yourself to read it, I don't think you'll be disappointed. But, I'm not going to push anyone to read a book they don't think they can handle.