Night of the Living Deed by E.J. Copperman

It's not easy being a divorced mother of a nine-year-old girl. 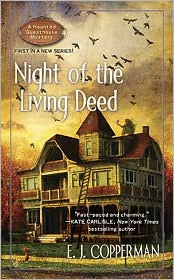 And, it's not easy trying to renovate a Victorian house. Throw in two ghosts, and Alison Kerby isn't having a good October in E.J. Copperman's first Haunted Guesthouse Mystery, Night of the Living Deed.

Alison thought she only had to renovate a house, and she had the skills to do that since her father had taught her handyman skills. But, when a ghost breaks through a plastered wall, Alison is angry at the destruction of the house. And, Maxie, the former owner of the house, is malicious and won't give up until Alison agrees to investigate Maxie's death. She died at the same time as Paul, the private detective she had hired. Unfortunately, their deaths had been ruled suicide at the time, but Maxie and Paul insist they were murdered. Alison isn't interested in playing amateur sleuth. However, when she receives a threatening email, she realizes her safety, and her daughter, Melissa's, may depend on her teaming up with a couple ghosts.

What is it about Alison's new house that attracts so much attention? A land developer wants it. The mayor wants to see it. And, even Melissa's history teacher seems obsessed with the house. And, then there's the person who is terrorizing Alison.

Copperman's Alison Kerby is my kind of amateur sleuth, reluctant. She doesn't like Maxie. She only wants to renovate her house and turn it into a guesthouse on the Jersey Shore. But, if she has to consort with ghosts and pry into secrets in Harbor Haven, she'll do it to protect her daughter. Of course, most nine-year-old girls are wise beyond their years, and Melissa wants in on the action. And, Alison's mother, is much more in tune to the spirits' needs than Alison knows.

Fans of Alice Kimberly's Haunted Bookshop series will enjoy this book. Copperman's first story in this new series is promising with a solid cast of characters, Alison, her mother, her daughter, and the ghosts. Night of the Living Deed is an interesting mystery with some funny situations in the middle of a threatening situation. Don't miss this one. You'll want to meet Alison, Melissa, and, my favorite ghost, Paul.

*****
FTC Full Disclosure - The author, and the publisher, sent me copies of this book, hoping I would review it.
Posted by Lesa at 4:00 AM

I've got this one ordered and coming soon. I am a fan of the Haunted Bookshop mysteries and this one tickled my fancy as well. :-)

The cover is amazing for this book and I love the plot. This is one I'm looking forward to reading. :)

As a fan of the Haunted Bookshop mysteries, I predict you'll like this one.

Isn't that a gorgeous cover, Elizabeth? And, I really like Alison Kerby. This isn't a woman who plunged herself into an investigation. She was forced to do it, and terrorized in the course of it, but she was determined to protect her daughter.

I love this cover too, and I'm really looking forward to this one! Thanks for posting the review, Lesa!

It's a great cover! And I join you all in looking forward to reading this one.

You're welcome, Julie. I'm hoping E.J. Copperman has good luck with this series.

Ah ha! I beat even Kaye in reading this one. (And, I had an actual book in my hands before the author did. Talk about gloating.)

Renovate a house AND a mystery? I am so there. Great review, Lesa!

Hope you have a terrific weekend.

Thanks, Beth. I can see why this might fit your taste. And, Alison really knows what she's doing in renovating that house. You'll enjoy it!

You have a terrific weekend, too, and thanks for the #ff today.

Love the review. I have this one on order and can't wait to read it!

And, I definitely did not give away more than I should have, Bev. I'm glad so many people have it on order. That's a good sign!

I love the title.

The author who is E.J. Cooperman loves word play, so his titles are usually good, Ricky.

Sounds like a winner! Thanks for the recommendation.
~Avery

You're welcome, Avery. Sounds as if a lot of people are going to buy this one, which is always good.

So glad you enjoyed this one. It sounded good, but now that I know you liked it, I'm even more excited to read it.

I did enjoy it, Kris, and I had email from a friend yesterday who said she did too, and she really liked the main character. She said Cooperman does a nice job with female characters.

You can send fax documents usually from anywhere with internet or by traditional fax machines. You can send faxes without the need for a separate dedicated additional fax line. Here are the ways you can do that: The paper-loading cassette can hold up to 500 sheets of paper. Check if there are additional fees for exceeding the limit of certain packages. Instead, he finds that he has to purchase a fax machine, purchase printer ink, purchase special fax paper, subscribe to a dedicated fax line, and even waste valuable office space with an ugly fax machine.