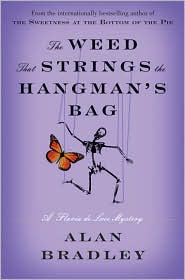 Award for his first Flavia de Luce mystery, The Sweetness at the Bottom of the Pie. And, that book just won the Dilys Winn award from the Independent Mystery Booksellers Association for the book they most enjoyed selling last year. Is it any wonder mystery readers were eagerly awaiting Flavia's return in The Weed That Strings the Hangman's Bag?

If you haven't met Flavia de Luce yet, she's a precocious eleven-year-old with a passion for chemistry and poisons. And, once she solved her first murder case, she now considers herself an able assistant to the local police. With her knowledge of the villagers in Bishop's Lacey, and her curiosity, and her ability to portray an innocent eleven-year-old, Flavia is the perfect sleuth. In fact, her curiosity about death extends so far that she spends time pretending to be a corpse in the local cemetery. "I was lying dead in the churchyard," is the opening sentence that leads to Flavia's involvement in her latest case.

Interrupted in her death scene by a bird, Flavia finds a crying woman. Her inquisitiveness leads her to befriend Nialla, who plays Mother Goose in a traveling puppet show. Rupert Porson owns Porson's Puppets, and his van broke down near the cemetery. Flavia forces herself into their business, and, when the vicar asks them to do a puppet show, eagerly learns everything she can before succumbing, like any eleven-year-old, to the magic of the puppet theatre. But, she's as shocked as any of the other villagers when she sees that the Jack puppet, from Jack in the Beanstalk, looks just like a five-year-old boy that was found hanged near his parents' farm five years earlier.

And, as Flavia observes, Rupert seems to stir up all kinds of trouble in the area, not just with his puppet. There are the women who love him, the BBC executive who is mad at him, and the farmer he argues with. Throw in the local mad woman, a former German POW, and it seems as if any one of them could have carefully planned the unforgettable exit scene for a man of the theatre.

Once again, Flavia comes to life as the neglected youngest daughter in an eccentric British household in 1950. Her investigations keep her busy, giving her the attention and approval she craves. At the same time, she is a tragic figure, a lost little girl with no one that actually loves her. And, even her sisters torment her with the stories that her mother was depressed after she was born, and that's why the mysterious Harriet died tragically in an accident. Alan Bradley is brilliant in his portrayal of a young girl, wise beyond her years, but still an innocent child at heart. Even Flavia acknowledges she's in that in-between stage of life, while watching the puppet show. "I'm at that age when I watch such things with two minds, one that cackles at these capers and another that never gets much beyond a rather jaded and self-conscious smile, like the Mona Lisa." The Weed That Strings the Hangman's Bag continues Flavia's story, and is even better than the first book.

Alan Bradley will be appearing for Authors @ The Teague on Thursday, April 1 at 2 p.m. If you're in the Phoenix area, I hope you can join us!

*****
FTC Full Disclosure: I bought my copy of the book. I couldn't resist when, in Bradley's Acknowledgements, it says, "Thanks, too, to Lesa Holstine and Cathy Johnson, for a very special evening during which we talked happily about everything under the sun." Thanks to Barbara Peters at the Poisoned Pen for that very special evening. You can read about it here.
Posted by Lesa at 4:00 AM

I planned to read this mystery and am glad to know there is another one out! I'm a bit behind! Nice review.

Now THIS is an interesting protagonist for a mystery!

I've got a nine year old who plays a sidekick role in my Memphis books and it's a difficult line for me to write...balancing the precociousness with realism. I'll be interested in reading this book...thanks for the tip!

Just wanted to say hi and to let you know that you have been in my thoughts and hoping you are doing ok.
CMashLovesToRead

Thank you, Harvee. And, I know I didn't even give away as much of the plot as the book jacket did. So, I didn't spoil it for you.

That was the problem for some readers when the first of Alan Bradley's books came out. They had a hard time with the protagonist. I think she's perfect, just the way he writes her.

Thank you for the kind thoughts. I'm doing OK, thanks to family, friends, and good books. I keep busy.

What a good post--thanks! I am now on a mission to find these books at my library...I've seen them in passing, somewhere, and you have further piqued my interest.

I really need to start this series. Flavia sounds like such a delight!

I haven't read these books. They sound great!

I know Alan Bradley at the Authors @ The Teague will be a huge success. What a lovely Birthday present.

Thanks for the review. I have the book on my Kindle. I read a bit of it and put it down. Thanks to this review I'm sure I'll pick it up again.

I very much liked the first book.

Thank you, Dana. I hope you find these books, and, I hope you like them.

Bermudaonion - There are some people who didn't like Flavia, but I think she's wonderful.

Thanks, Laurel. I'll have to check out your Salon.

It just might not be the book for you, Joe. Flavia isn't for everyone. Let me know if you continue to read it or not.

I think it's the perfect birthday present, Janet! I'm going to enjoy his visit to Velma Teague.

I loved it, and agree that it's even better than the first book! I'm glad you pointed out the acknowledgments. I almost always read them, but somehow I missed them when I finished this book. Glad to see your name among them!

Well, I can see why you didn't read the acknowledgments, Sheila. They were a little long. (smile) But, I think he thanked every independent bookstore owner. Very smart!

Thanks for reminding me that I need to read this. I'm not wild about books that have precocious children, but after reading your review I am looking forward to it a little more.

If you read the first book, and remember that Alan Bradley's older sisters actually tied him up in a closet, you might have a little more sympathy for Flavia at the beginning. And, if you don't, the books weren't meant for you. Don't feel bad if you don't like them. You don't know how many literary novels weren't meant for me. (smile)

I loved The Sweetness at the Bottom of the Pie and am looking forward to this new release. I may read it for Dewey's Read-a-Thon later this month.

How very cool to get a mention in the acknowledgements, Lesa. :) Wish I could be in Phoenix today!

So many people liked this one even better than the first, so I know you're going to like it.

I wish you were going to be here today, too!