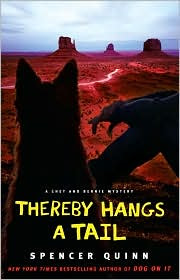 Dog On It launched a unique detecting team, The Little Detective Agency, owned by Bernie Little, whose partner was his dog, Chet. Chet is the spokesman for the agency, the narrator of the story. He has a new story to tell in Spencer Quinn's Thereby Hangs a Tail.

Chet knows Bernie's finances, "our finances," are a mess, with alimony, child support, and bad investments, so he's excited when Lieutenant Stone of the Metro Police recommends them for a case, acting as bodyguards for a show dog who is going to compete in the Valley's Great Western Dog Show. It's too bad Chet can't restrain himself when the other dog, Princess, is offered a snack. Before they have a chance to accept the case, they're fired.

It's also too bad Bernie and Chet weren't on the case because it isn't too long before Suzie Sanchez, a reporter for the Valley Tribune, lets them know Princess and her owner, the Countess Adelina di Borghese, were kidnapped. Bernie feels responsible, so he asks the count if he can take the case. It may have started out as a kidnapping case, but it becomes more serious to both Chet and Bernie when Suzie disappears. And, the whole case becomes complicated when Bernie and Chet are ambushed in a ghost town saloon.

Chet is a unique, wonderful narrator for the cases of The Little Detective Agency. He's Bernie's Watson, with a poor memory. Or, I should say, with a memory that is easily sidetracked. Chet remembers cases, and clues, but he's a dog, sidetracked by scents, food, other dogs, anything of interest to a dog. And, we continue to learn about Bernie's life and past, through the voice of Chet. It's fascinating, and fun, to watch the unraveling of a case, through Chet's eyes.

If you're expecting a cutesy animal mystery, you're in for a surprise. If you're returning for Spencer Quinn's second book because you enjoyed the first, you're in for a treat. Chet actually does an excellent job as narrator, revealing a story of kidnapping, greed, and murder. He also does an excellent job interpreting Bernie's frustration with the environment and growth in Arizona. Spencer Quinn, and Chet, have a complex mystery story to tell, and Thereby Hangs a Tail.

Very interesting POV! I love the idea of Chet as narrator and the fact that it's NOT a cutesy book makes me want to pick it up and see how Chet processes murder investigations.

Elizabeth, It is an interesting POV. I wasn't sure I was going to like the first book, but Chet sold me. He actually works as a narrator. And, because he doesn't remember everything, the reader stays one step ahead of the detectives for much of the book.

I haven't read the first book yet, but like you Lesa, I loved THEREBY HANGS A TALE. I'm now hooking everyone in my office on the books! Ha!

Sounds like an interesting twist on the narrator. It should give both a good mystery and a different approach to solving the crime. Thanks for the introduction, I hadn't heard of this series.

I haven't read Dog Gone It, but the series sounds like one I'd enjoy.

I liked Dog On It so I'm hoping that this one will appeal to me as well. Thanks for reminding me about it Lesa.

Very good, Jen! Nothing like hooking a bunch of people on a book. Best feeling in the world, isn't it?

I hope you like it, Mason. I was a little concerned when I read the first one, but Chet is a terrific narrator. He remains a dog, with a dog's viewpoint. But, it fits.

Try Dog On It, Bermudaonion. I'd like to know your opinion.

In some ways, this one is even better than Dog On It, because Chet reveals more about Bernie.

Absolutely loved Thereby Hangs a Tail. It's already on my top 2010 list!

Loved the first so looking forward to this!

I loved the first. Planning on getting this one.

Terrific book, wasn't it Janet? Chet revealed so much about past cases, and Bernie. He reminded me even more of Watson in this one.

If you loved the first one, you'll be equally pleased with this one!

This sounds like an interesting twist within the aninal-themed murder mystery genre. I'm adding it to my list!

It's a terrific twist to the animal-themed mystery genre. I hope you enjoy it!

I LOVED Dog Gone It (thanks to your recommendation) and have been patiently waiting the release of this second book. Unfortunately, the weather has prevented me from buying it, and I am number 20 on the waiting list at the library. Still trying to be patient.....

Oh, it will be worth waiting for, Molly. As I said, in some ways, this is even better. You're going to love it!

I just started this and I LOVE Chet! He is such a dog, and that is definitely a compliment!

I LOVE Chet as well! When you say that, Lisa, I know what a compliment it is. Chet is a terrific narrator, and I never thought I'd say that about a dog.

Glad to hear the second is a hit as well! I enjoyed the first and have the second sitting on a book shelf waiting for me to read it.

The second is just as good, Kris. I liked all of the information we found out about Bernie in this one.