Sunday Salon is the perfect time to introduce an author 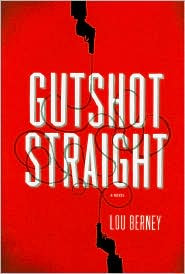 who writes my type of book, a fun caper novel. Not since Robert Fate's Baby Shark have I read a book that has larger than life characters, big enough to demand to be on the big screen. It's no wonder that Lou Berney is a screenwriter. His debut novel, Gutshot Straight is a fast-paced, now you see it, now you don't, novel. This novel should go straight to the movies. And, even then, it's going to be hard to keep up with the switches in this comical caper novel. Anyone who is a fan of Stephen Cannell's King Con, Jeffrey Archer's Not a Penny More, Not a Penny Less, or the classic film, The Sting, needs to read this story.

Nothing is what it appears to be in this book. Just before he's released from prison, Charles "Shake" Bouchon seems to be just a mild-mannered wheel man capable of stealing or driving a car. But, at forty-two, Shake has a few surprises for the tough con who wants to take him out. And, Shake's thoughts of going straight last only until he gets off the bus in L.A., when Alexandra Illandryan, the boss, the pakhan, of the Armenian mob, picks him up, and offers him a simple job. Drive a car to Las Vegas for her, turn it over to someone in a parking lot, pick up a briefcase, and bring it back to her. Just a $20,000 simple job, right?

As much as Shake wants to cooperate, he didn't count on finding a young woman named Gina in the trunk of that car. An associate once told Shake "He was too nice for this business but not nice enough for any other." So, the poor sucker instinctively wants to protect Gina from the Whale, Dick Moby, the man who ordered her to be picked up. Shake believes Gina when she tells him she's just a Morman wife and mother with a husband with gambling debts, and she must have been kidnapped to be killed because of her husband. Poor Shake. He's going to learn quickly to NEVER, EVER believe anything Gina tells him.

But, Gina has a charming way of working her wiles on men and women alike. Everyone from strippers to businessmen, escaped felons to Shake, trusts Gina to play fair. And, suddenly, Gina and Shake are on the run, first in Las Vegas, and then in Panama, as they scheme for their own share of a pot of money. It's an unlikely treasure that takes them to Panama, and, it's equally unlikely that this pair will ever succeed. There are thugs on their trail from the moment Shake decides not to turn Gina over to the Whale.

Anyone who enjoys fun characters, and a caper novel in which thieves con other thieves, will enjoy Gutshot Straight. Shake and Gina are charming thieves, and you can't help but root for them against the scummy thugs who are after them. But, just a warning. NEVER, EVER believe anything Gina says. Now, we just need to see who will play Shake and Gina in the movies. Lou Berney's Gutshot Straight deserves to be seen as well as read.

Check out the book trailer for Gutshot Straight.

You sold me on this novel with "nothing is what it appears to be in this book." Those are such fun books to read!

Great review and video. I have this in my TBR pile, can't wait to start it. Thanks.

Down to the very last page, Elizabeth. You're going to have fun with this one.

You're welcome, Mason. I don't know how big your TBR pile is, but you'll be happy to reach this book.

Lesa - I read GUTSHOT STRAIGHT a couple of weeks ago and loved every wild and unpredictable minute of it. I truly couldn't put it down. Such a fun novel and, you're right - this is movie material for sure. So glad to see you featuring it here on your blog. Whether Lou Berney continues these characters in the next book, or starts from scratch with a new bunch, I'm in. Looking forward to it.

Wasn't it terrific, Julie? Like you, I loved every minute of it. Great characters, aren't they? Yes, I'll be checking to see what else he's going to write. I hope it doesn't take another strike in Hollywood to give him time to write another novel.

I'm reading this book right now and enjoying it a lot. Thanks for the trailer, too.

Naomi, I'm glad you're having fun with Gutshot Straight, too!

Lesa, thank you for this review! I will look forward to reading this book -- it sounds great.

It was terrific, Beth. I booktalked it yesterday, and I hope I have a nice turnout for Lou's appearance at the library on Friday.